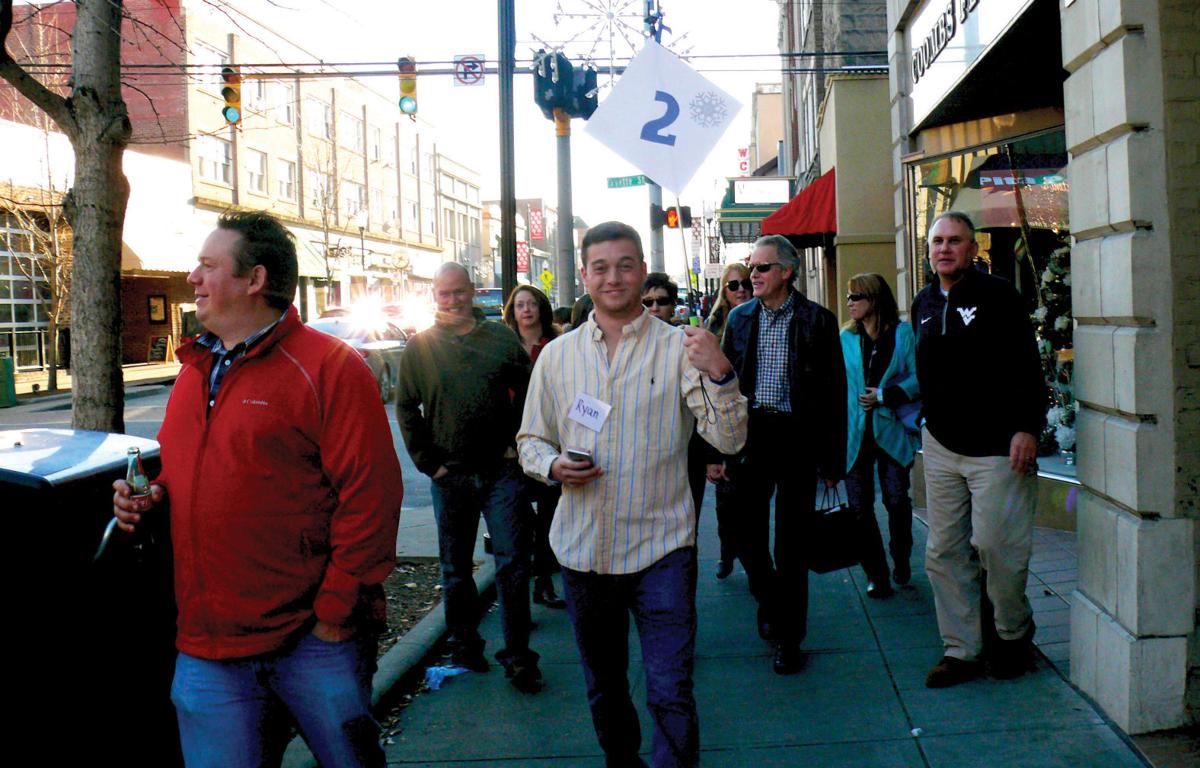 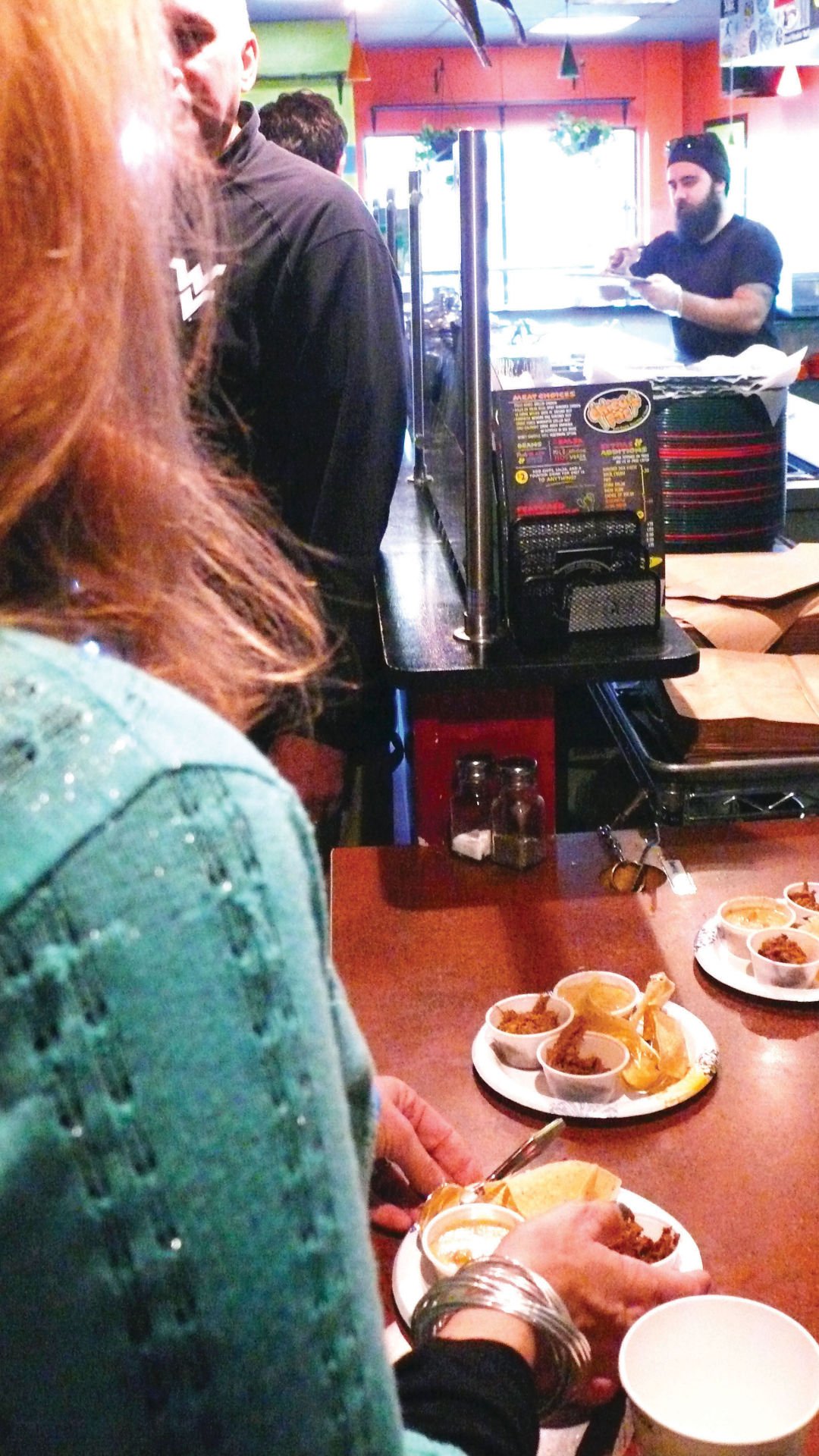 Chico’s Fat offered many samples to the locals who participated in the Culinary Crawl.

Chico’s Fat offered many samples to the locals who participated in the Culinary Crawl.

Foodies united Saturday as Downtown Morgantown hosted the Morgantown Culinary Crawl, where individuals were given a complementary taste of the town.

Starting in the Monongahela Arts Center on High Street, students enrolled within the Reed College of Media’s Public Relations 493 event planning class greeted guests bundled in their coats and scarves who were eager to commence their evening of dining on various downtown grubs. After signing in, individuals participating in the Culinary Crawl were able to sample delicacies from restaurants like Table 9, Morgantown Brewing Company and Sargasso.

Serving a burgoo stew appropriate for the chilly fall weather was Morgantown Brewing Company, who also treated guests to delicious mini pepperoni rolls. Serving an array of tapas to guests, Sargasso treated those to a warm pork belly brûlée as well as Preston County buckwheat blini with smoked coho silver salmon and a cool, avocado terrine. The small and refreshing appetizers were paired with a flavorful red wine sample.

Also serving and greeting guests, Table 9 dished out Devils on Horseback and bourbon hot apple cider. The warm dates filled with pear, almond and goat cheese wrapped in bacon and drizzled with Table 9’s slightly spicy pepper jam went perfectly with the spiked flavor of the warm apple cider. Serving for Table 9 were Jason Fickes, Table 9 sous chef and Paige Powers, Table 9 server and host, who said they enjoyed being out and serving some of Table 9’s classic dishes.

"This event is great, it gives a lot of exposure to people who normally don’t come to the restaurant because it’s not necessarily right downtown," Fickes said. "We’re not right on High Street, so this event allows people to taste our food and get to know about us."

The two stated events like this truly bring a sense of community to the town and create a great opportunity for downtown venues that are downtown, but are more toward the Waterfront vicinity to participate in downtown events. Fickes and Powers also said events like this allow Waterfront and Warf restaurants to remind Morgantown residents that their dining is also available downtown.

New to the downtown Morgantown food scene, guests Chip West and Debbie West sampled each tray of food at every restaurant.

"We’ve enjoyed all of the food, it has been interesting for us," Debbie said. "We’ve never done anything like this before. We’ve actually never tried any of these restaurants we’ve been in so far."

The Fairmont couple said they had not tried any of the food from the restaurants and were invited on the tour with their daughter and son-in-law.

"We’ve never really been around here since we’re from Fairmont," Debbie said. "It’s really all new to us, we’ll really be more apt to come up to Morgantown more often to dine."

The two said they felt the event did for them what it was intended to do, which was give them a better understanding of the dining options available in downtown Morgantown.

TK’s Fruit, Produce and Bubble Tea provided participants with black and green bubble tea. Guests browsed the aisles of colorful fruits and produce while trying their choice of black or green tea. With the option to choose between regular black or green tea, participants also tasted tea with milk in it and without milk in it. Bubble tea is given its unique name for the small tapioca beads that lie in the bottom of the tea. TK’s Fruit, Produce and Bubble Tea serves different flavors of the small beads, giving unique flavors to the different black and green teas.

A tour group favorite, Tin 202 greeted guests with a light Rosemary Cocktail. Infused with rosemary, bourbon and a tinge of apricot, guests sipped the signature drink alongside servings of almogrote with farmhouse cheese made from scratch pair with a baguette and warmed pita chips. Made from hard cheeses, peppers, olive oil garlic and other ingredients, almogrote is a soft paste best served with breads.

After sampling cocktails, a churro paired with Puerto Rican coffee was served to guests at Garcia’s Latin Market. The Latin restaurant’s churros were sweetly seasoned and guests were given the option to browse the market and snack.

Although the Culinary Crawl has now passed, individuals can still partake in Restaurant Week, where various Morgantown restaurants will serve special dishes at discounted prices.