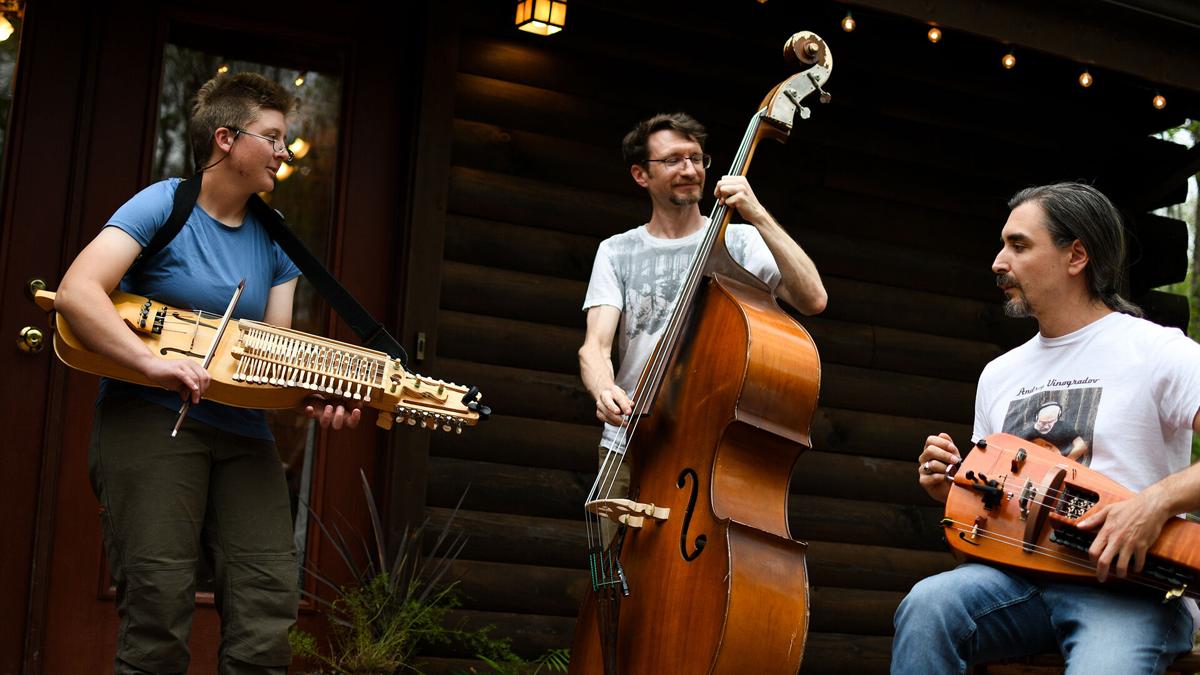 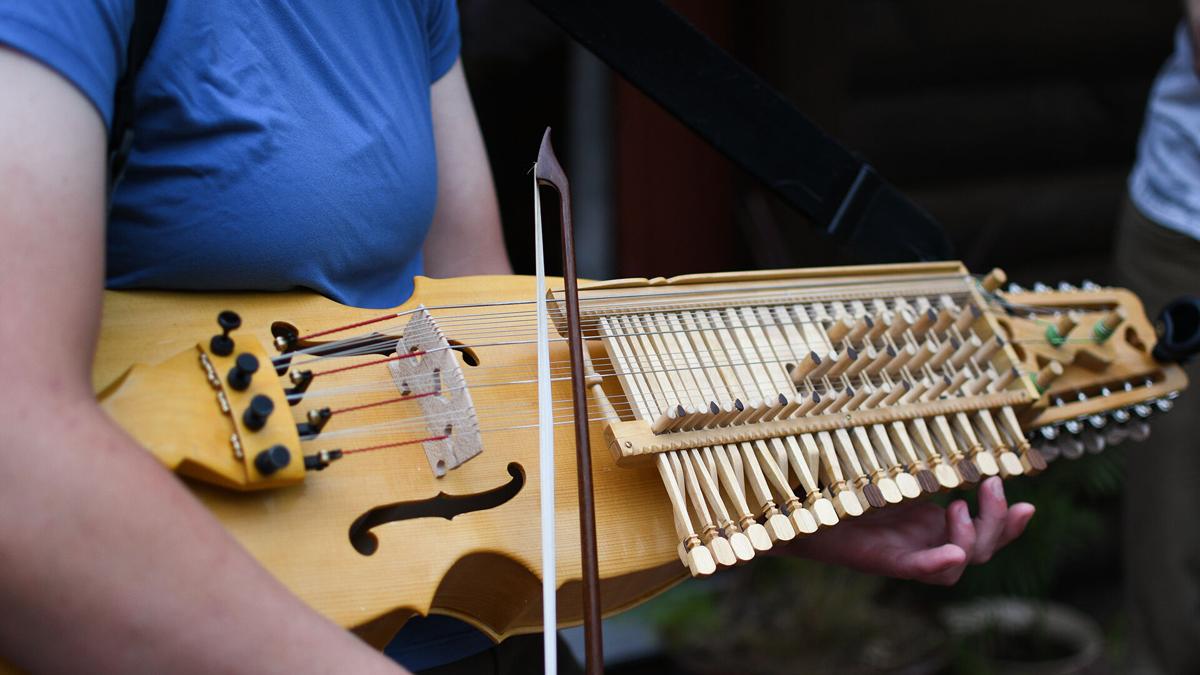 Claire Sweeney plays the nyckelharpa, a traditional Swedish instrument with keys, or frets, that change the pitch of the corresponding string. 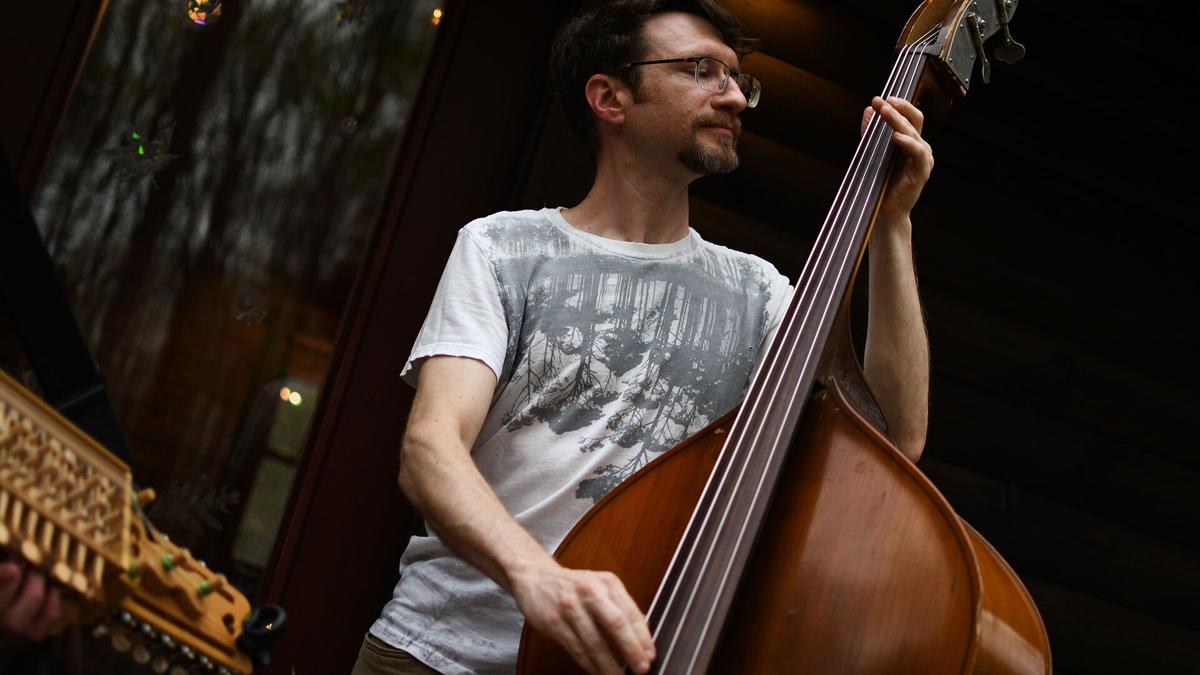 Dave Riggs plays the upright bass during a practice session at his home in Grafton, West Virginia, on Apr. 28, 2021. 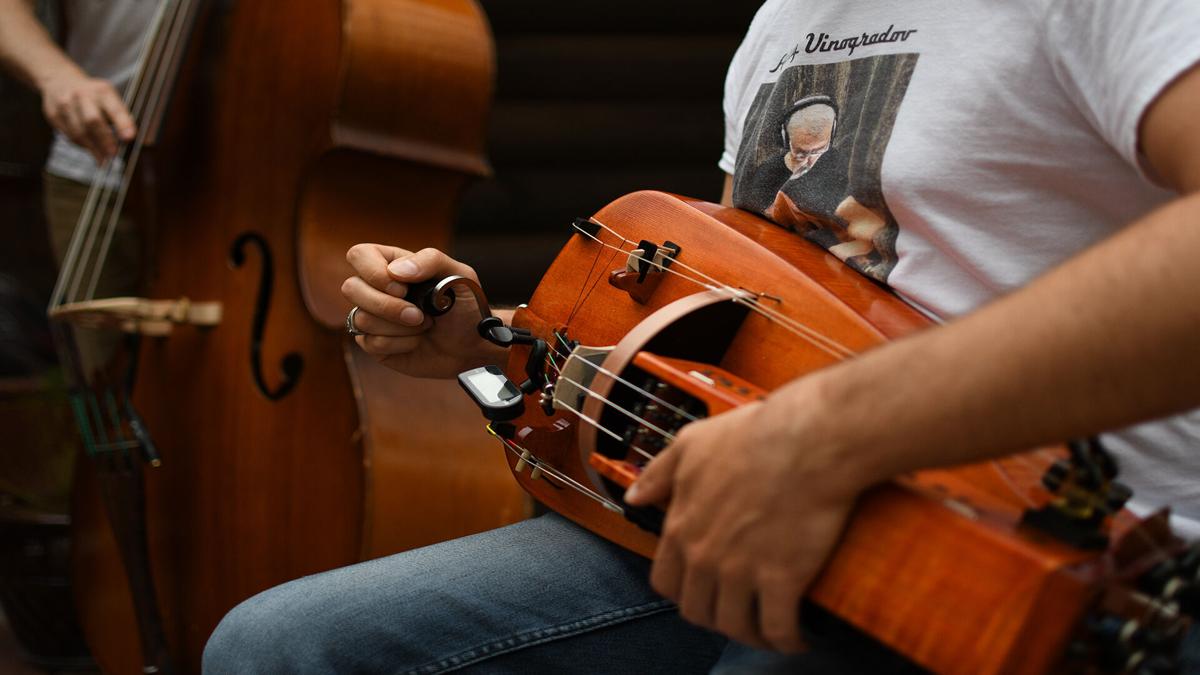 Ryan Baker plays the hurdy-gurdy, or wheel fiddle, a string instrument from Eastern Europe that produces sound by a hand-cranked-turned wheel rubbing against strings.

Claire Sweeney plays the nyckelharpa, a traditional Swedish instrument with keys, or frets, that change the pitch of the corresponding string.

Dave Riggs plays the upright bass during a practice session at his home in Grafton, West Virginia, on Apr. 28, 2021.

Ryan Baker plays the hurdy-gurdy, or wheel fiddle, a string instrument from Eastern Europe that produces sound by a hand-cranked-turned wheel rubbing against strings.

But what’s unique about this particular band isn’t the music itself rather how they play it, according to Riggs.

“What attracts me to it is not the tradition but the sort of hypnotic nature of this nyckelharpa, which sounds like a dozen fiddle players playing at once and the hurdy-gurdy, which almost has a psychedelic sound to it,” Riggs said. “That to me is what makes this combination of our instruments and the music that we play really unique.”

Autumn Equinox will be performing at the upcoming Arts Walk on May 8, from 2 to 4 p.m. outside of the Monongalia County Courthouse.

“I just like playing these things because I like to introduce people to these instruments because I don’t think they know that they exist,” Baker said. “And I would like to see more people get interested in this kind of music.”

Ryan Baker had played in an Irish traditional music session for over 15 years. After moving back to West Virginia, he began playing the hurdy-gurdy, a string instrument from Eastern Europe. Baker said he instantly fell in love with the hurdy-gurdy after watching a video of musician Andre Vinogradov play the instrument.

“I saw one of his videos and thought, my God, if something can sound like that I want to play it,” Baker said. “Then I ordered one.”

Baker then crossed paths with Riggs who played the cajón, a box-shaped percussion instrument, and after a few practice sessions, they began looking for a third member on Craigslist.

A few ads later, they found Sweeney, a fiddle player since the age of six. She has a broad background in Appalachian and Irish music.

Over a year ago, Sweeney began playing the nyckelharpa, a string instrument she says is closely related to the fiddle.

“A lot of the techniques and stuff that I would play on the fiddle have transferred over, so it's been sort of a relatively easy transition, learning how to play it [the nyckelharpa],” Sweeney said.

From there, Sweeney and the others began to craft a unique sound using a variety of instruments and genres of music.

“I hate to use the term ‘world music,’ but I feel like we draw from a lot of exotic cultures, musical cultures in that sense,” Riggs said. “I feel we kind of meld them together interestingly.”

While the COVID-19 pandemic has presented a variety of challenges to musical artists, Riggs said it provided his band with an opportunity to master new instruments and put together a larger setlist.

Before the pandemic, Riggs said the band had just under 30 minutes worth of music. They now have enough music for a two-hour gig.

With summer on the horizon and mask mandates outdoors being lifted, Riggs said the band is finally getting a chance to share their unique music with people.

The band last played at the ‘Touch the Earth Festival,’ an event hosted by the Mon Valley Green Space Coalition on April 17 at Marilla Park. It was one of the first events they’ve played in person in over a year.

“We’re glad to finally be able to share it with people,” Riggs said.

Pet of the Day: Sam

Pet of the Day: Blackie

Pet of the Day: Eggnog