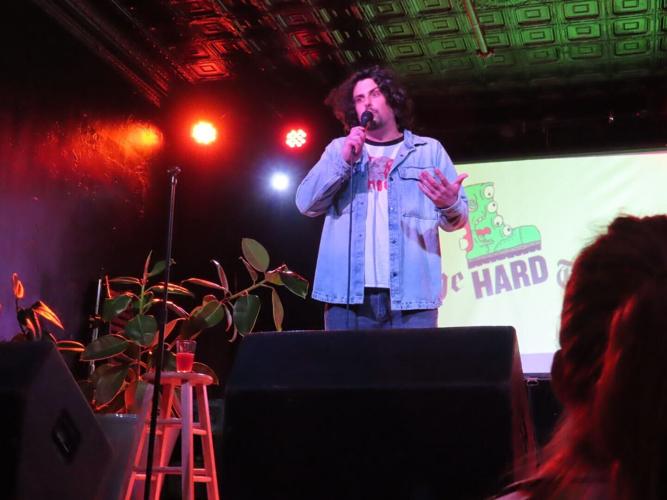 Cody Cannon, a local comic, performs at the Red Eye Comedy and Beer Festival at 123 Pleasant Street on April 1, 2022. 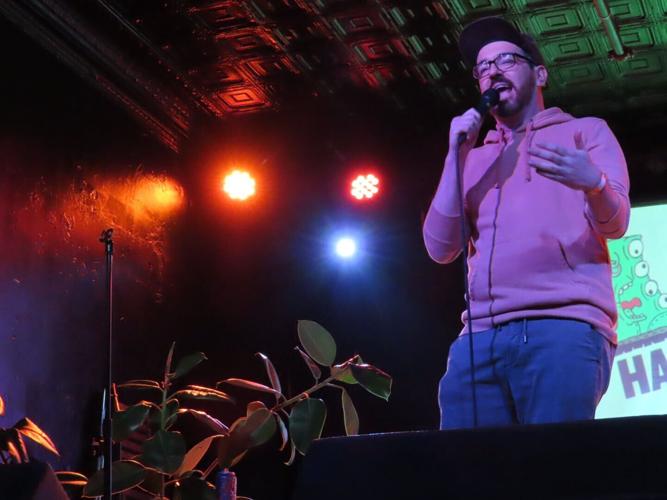 Dave Ross, an LA based comic, performs at 123 Pleasant Street at the Red Eye Comedy and Beer Festival on April 1, 2022.

Cody Cannon, a local comic, performs at the Red Eye Comedy and Beer Festival at 123 Pleasant Street on April 1, 2022.

Dave Ross, an LA based comic, performs at 123 Pleasant Street at the Red Eye Comedy and Beer Festival on April 1, 2022.

With five shows on four stages over three nights, the first ever Red Eye Comedy and Beer Festival brought talent from all over the country to perform in Morgantown throughout the weekend.

Each event during the festival featured a different line up of comedians and over 25 individual performances took place throughout the festival.

The festival of laughter was co-organized by Cody Cannon, a seasoned local comic, who wanted to bring a festival like this together to celebrate the art and inspire growth of the comedy scene in Morgantown.

Comedians that performed at the various shows traveled from New York, D.C. and Los Angeles. A handful of locals also performed.

The festival was brought to downtown venues including The Pissbox, Morgantown Art Party, 123 Pleasant Street and Morgantown Brewing Company.

The event at 123 Pleasant Street was intentionally placed to fall on the night of April Fool’s Day. The headliner at this show was Dave Ross, an LA based comedian who’s appeared on “The Late Late Show with James Corden,” and Comedy Central.

The 123 show was hosted by “The Hard Times,” a satirical music news outlet based out of San Francisco.

The portion of the festival that took place April 2, at the Morgantown Brewing Company sold-out and featured regional guest beers on tap and comedy all day. The headliner of this show, Aminah Imani, has been featured on Comedy Central and other television shows.

The Red Eye Comedy festival was organized by Cannon and his friend Noah Basden, the two of them had the festival originally planned for spring of 2020, but the pandemic halted the festival.

Cannon is the primary booker of comedy for 123 Pleasant Street and Morgantown Brewing Company, and his show booking has recently branched out to venues in Charleston and Fayetteville, West Virginia.

“My goal for West Virginia is to bring comedians. We’re six hours from New York, three from Columbus, three from D.C. and an hour south of Pittsburgh. I just want to make Morgantown a stop that comedians want to make,” Cannon said.

Cannon would also like to see more university students involved in the local comedy scene. For those looking to get onstage, open mic nights hosted by Cannon happen twice monthly.

Open mic nights at 123 Pleasant Street are the first Wednesdays of every month and Morgantown Brewing Company hosts one monthly.