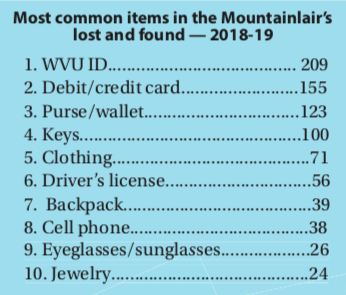 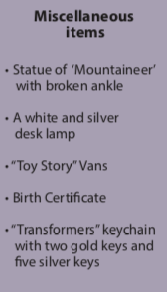 With everything going on in the lives of college students, it’s not surprising they often leave things behind.

It’s not done on purpose, but when constantly carrying books, laptops, cell phones and wallets, it’s bound to happen. It’s especially bound to happen in the busiest place on campus — the Mountainlair.

The most commonly misplaced items are small and easy to forget. It’s not recognized they’re gone until they’re needed, and, once it’s realized the item is lost, the panic sets in.

This is not only true of items such as earbuds, which can easily be replaced, but of more important items, too, Ellington said. One of the most essential items to anyone — not just college students — is their credit or debit card, yet these are one of the most lost items, he said.

Despite this, Ellington said most people do not come back for lost credit and debit cards. Instead, they simply call their bank and cancel the card, leaving the Mountainlair to dispose of it.

“If we have something of value like a credit card, after seven days it gets destroyed,” Ellington said. “Things like cell phones or thumb drives, we keep those for approximately 30 days and, after 30 days, we may hold them for a little bit longer, but we’ll destroy them because it may have confidential information on it.”

With items left behind such as clothing, there is less urgency for them to be removed. Those items are often donated to Goodwill or local charities, but still require the administration of the Mountainlair to decide what to do with them.

“Once a semester, we sit down with everything we have in the lost and found and determine where to put it — whether to destroy it or to let it go,” Ellington said.