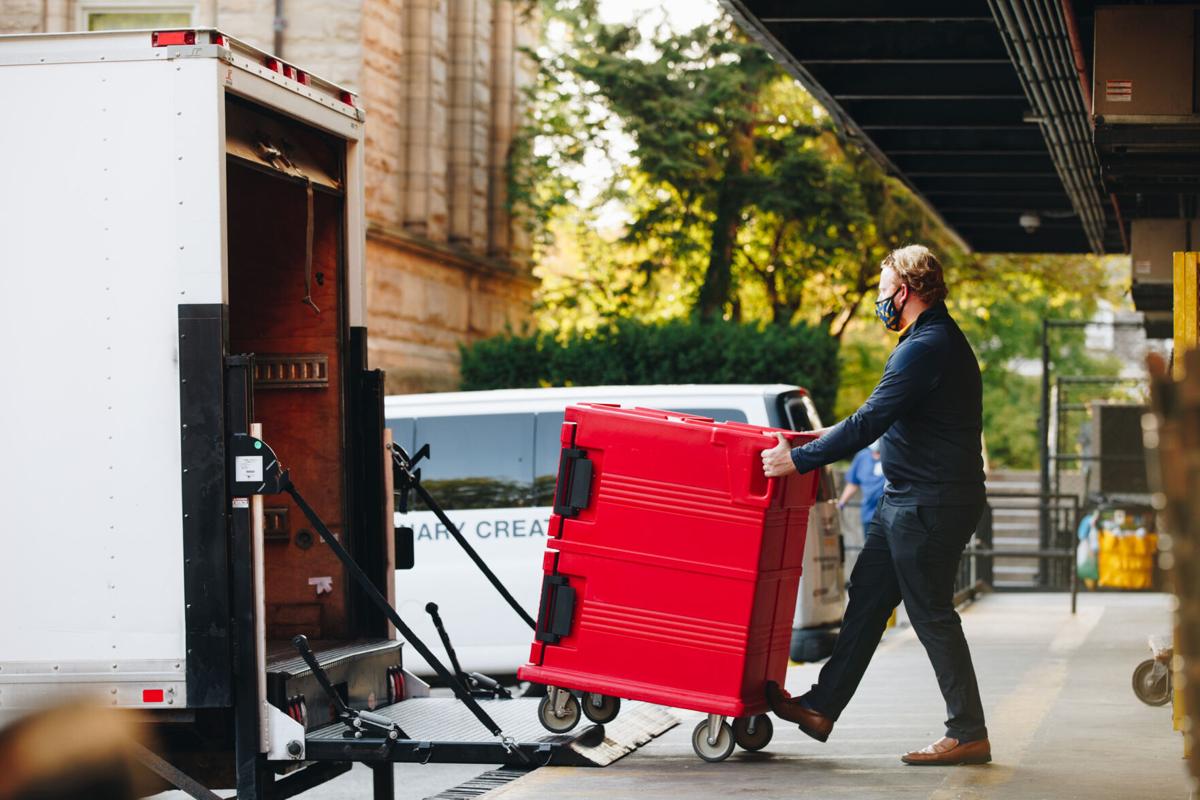 Ramsey Kinsella, a WVU dining services manager, loads a hotbox with meals for students in quarantine at the loading bay behind Hatfields on Sept. 22, 2020. 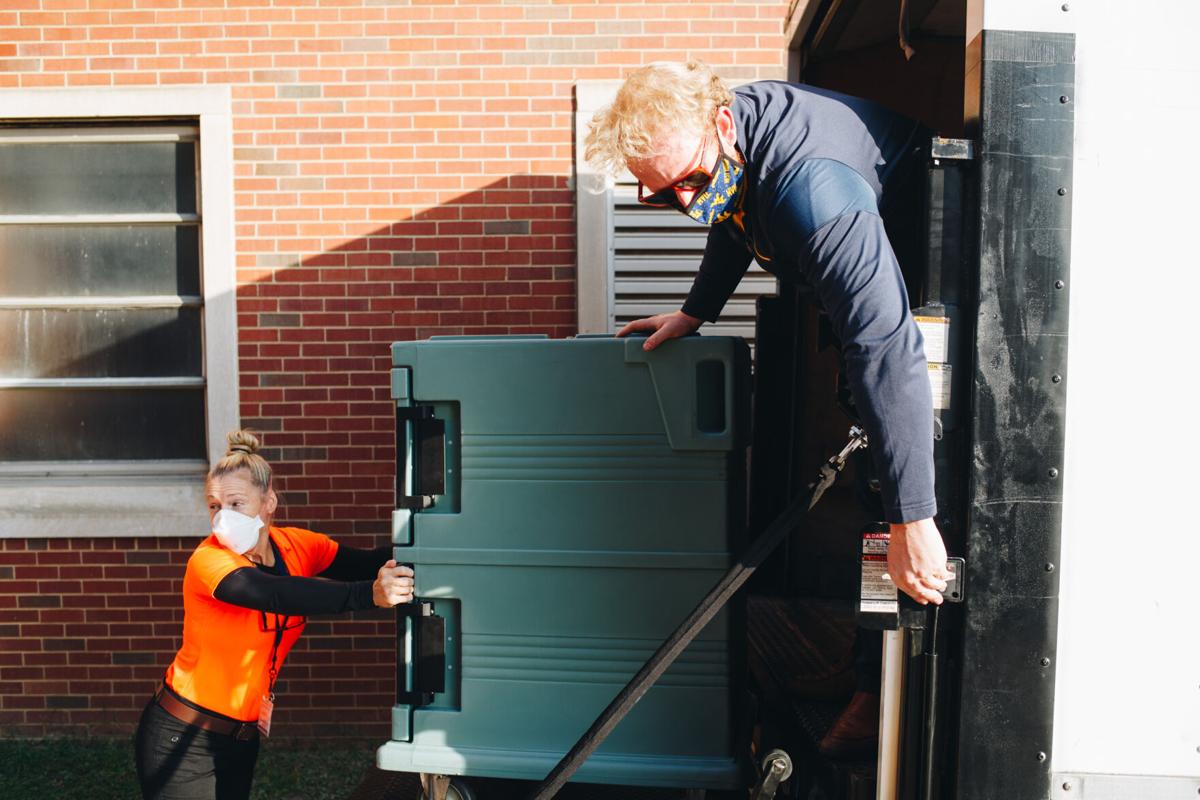 Ramsey and Kelly Heslop, left, unload meals outside Arnold Hall and Apartments on Sept. 22 for students in isolation due to COVID-19. 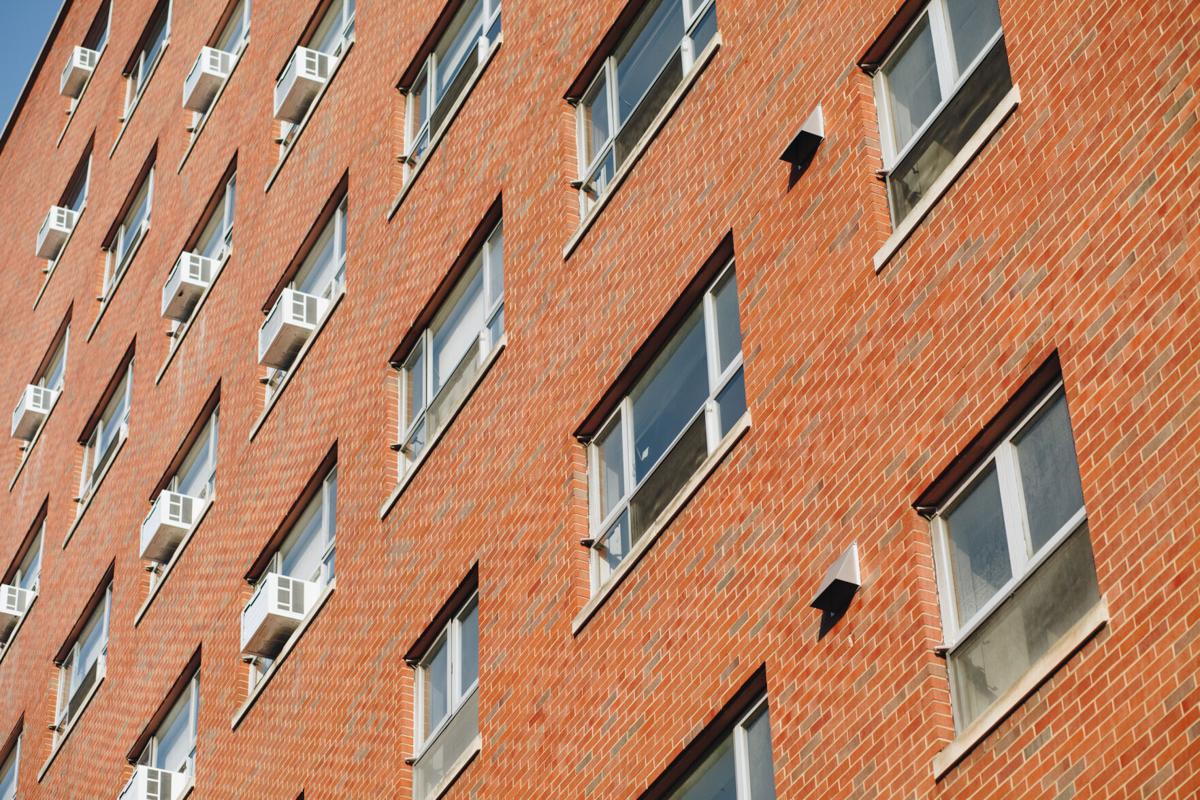 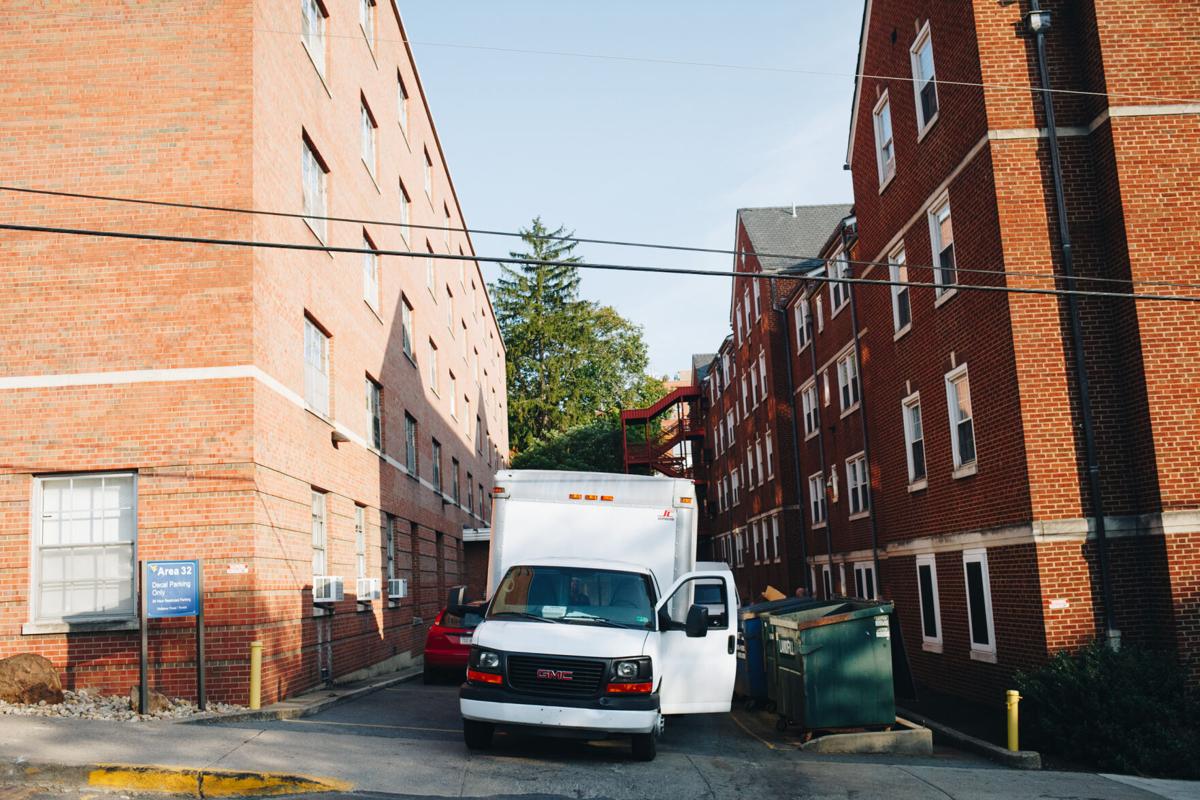 A delivery truck with food for students in quarantine sits in between Boreman North and South on Sept. 22, 2020. 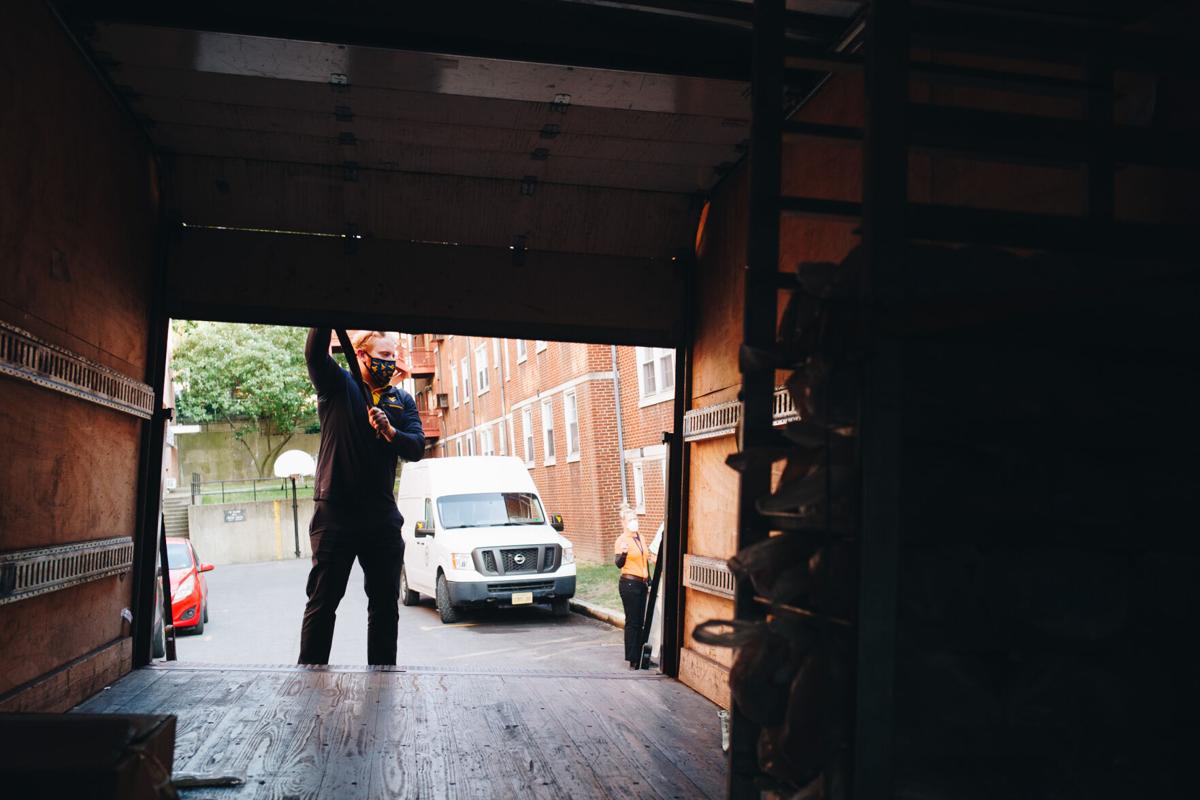 Ramsey closes the back of his delivery truck after delivering meals to students in quarantine.

Ramsey Kinsella, a WVU dining services manager, loads a hotbox with meals for students in quarantine at the loading bay behind Hatfields on Sept. 22, 2020.

Ramsey and Kelly Heslop, left, unload meals outside Arnold Hall and Apartments on Sept. 22 for students in isolation due to COVID-19.

A delivery truck with food for students in quarantine sits in between Boreman North and South on Sept. 22, 2020.

Ramsey closes the back of his delivery truck after delivering meals to students in quarantine.

Aidan Emanuel received notice from MedExpress Urgent Care he had tested positive for COVID-19 on Sept. 7. It was not until the next day that he was relocated to Arnold Hall and Apartments for isolation.

Unable to contact the University due to it being Labor Day weekend, the freshman global supply chain student told his resident assistant about his test results. For the time leading up to his relocation, he said he tried his best not to infect others around him.

“I had a roommate. He tried staying away from me as best as possible,” Emanuel said. “I always wore a mask whenever he was in there.”

The following day, a University van picked him up and took him to Arnold Hall and Apartments.

Each room in former residence hall contained a bed, mini fridge, a few towels, a pillow, bed sheets and a blanket. Emanuel was provided a thermometer and a mobile WiFi unit upon arrival.

A packing list for Arnold Apartments encourages students to pack the essentials, including clothes for at least a week, detergent for the on-site laundry facilities, medications, PPE and toiletries. Emanuel said packing properly for the eight days he would spend in isolation was a challenge, but a bottle of hand soap was something he said he wished he had thought to bring.

“I used my body wash for hand soap everyday,” he said.

Devin Jones, a freshman criminology and psychology student, said someone she sat next to in class reached out to her to let her know they tested positive for COVID-19. A week after being told by her classmate he had tested positive, WVU told her she would need to quarantine in Summit Hall from Sept. 8 to Sept. 22.

“It was kind of shocking because I knew a week prior when WVU reached out to me,” Jones said. “I was already taking precautions.”

Once WVU notified her about quarantining, Jones said she was required to get tested. Despite testing negative for COVID-19, Jones had to stay in quarantine for 14 days.

As of Sept. 22, 118 students are in quarantine in WVU residence halls after coming in close-contact with someone who tested positive for COVID-19.

SEE IT: Ride Along with a Quarantine Delivery Driver

During a food delivery, Emanuel said a service worker once said to him that the relationship between them was similar to one found in prisons.

“One day, I came out right as the [worker] knocked, and she said, ‘This feels like a prison,'” Emanuel said. “They were like a warden or an officer coming around and saying ‘food time’ and all the prisoners come out of their rooms.”

Sometimes a staff member would knock on his door in Arnold Hall and Apartments and provide him with a meal inside a brown paper bag, Emanuel said. Other days, food would be laid out on a table and a whistle would be blown to signal meal time.

“The food was terrible, not going to lie,” Emanuel said.

For students in both isolation and quarantine, meal delivery is done through a meal request form, which includes options for lunch and dinner. Orders for lunch must be placed by 8 a.m. and for dinner by 1 p.m. on the day of delivery.

A snack bag for breakfast is provided with dinner for the next day.

If meals are not picked up from outside the student’s door within the hour, they are discarded.

Alexis Mundorff, a freshman forensic examiner student, was in quarantine for three days in Stalnaker Hall. She said it was later found that she had not made contact with coronavirus within the timeframe first suspected and the quarantine requirement was lifted early.

Madison Seti knew when her vegetarian meal from WVU Dining Services included ham, eating in quarantine was not going to be enjoyable.

“They eventually did send out an email and I was able to sign up for stuff,” Mundorff said. “The way they had it set up wasn’t the easiest.”

Mundorff said the food listed on the menu she received did not correspond with what was delivered. She said one night, she placed an order for a Reuben sandwich, but chicken was delivered to her instead.

While meals are intended to be delivered between noon and 1:30 p.m., Jones said some days her meal was not delivered until around 3 p.m. She said the food was hit or miss, but typically was not nutritious.

“There could be more options,” Jones said.

Mundorff said even during the short time she spent in quarantine, she felt boredom and loneliness starting to take a toll on her mental health. She said she struggled to find motivation to get out of bed and to attend Zoom classes.

Since the majority of undergraduate courses went fully online on Sept. 9, she said those feelings of isolation have only continued.

“I am somebody who can’t be stuck inside,” Mundorff said. “I know for me, just getting a change of scenery would be fantastic for my mental health.”

If students choose to be relocated to Arnold Hall and Apartments, they must stay until their isolation period is completed, and entrances are monitored by staff to ensure students do not leave. Students are able to step out to get fresh air in the vicinity of the building under supervision.

Emanuel said he did not have a roommate, but a close friend lived right across the hall. Floors were typically not monitored, and a few times he would visit his friend’s room. Most of the day, he spent catching up on homework.

Isolation allowed him to focus on classes, Emanuel said, but his surroundings and lack of social interaction left him feeling bored most of the day. For the first five days he was in isolation, the internet connection was unstable, so he spent the majority of his freetime on his phone.

“You just sit in an empty room [with] very bare walls and windows,” Emanuel said.

Eventually, a television was delivered to his room and once he reported the poor internet connection, he was able to receive an alternative WiFi unit.

“It’s a lot better than quarantining for 14 days in a dorm,” Miller said.  “At least with Arnold there is more space and you can actually move around because everyone is already positive.”

T. Anne Hawkins, clinical director at the Carruth Center, said like anyone else, students are driven to connection. Without that connection, it can lead to feelings of loneliness, stress and anxiety

“When you are in isolation, it is harder to connect, it’s harder to be seen and heard,” Hawkins said. “I think students are probably feeling more disconnected from their families and from their friends and certainly from society.”

Hawkins believes WVU is doing what it can to provide students with safe, small group alternatives to promote social wellbeing. She said she still recognizes that student life is different, but those differences are temporary.

Hawkins said the Carruth Center and the care team are reaching out to students in isolation and quarantine to provide resources they need “to make it through what can be an uncomfortable time,” Hakins said.

The counseling center has also been preparing a social support discussion group for those in quarantine and isolation that will be available in the coming weeks. Hawkins said in partnership with Adventure WV, wellness-based activities are also in development.

Hawkins said having structure in day-to-day life is the best way for students to practice self-care. Doing routine activities including getting up and taking a shower, getting dressed, doing homework, attending virtual classes and having daily contact with friends and family is critical while in isolation.

If students are feeling stuck or feeling trapped while in isolation and quarantine, Hawkins said the best way to relieve those feelings is through movement as much as possible within the space students have. She said if possible, it is important to spend time outside.

“When people are isolated, what we know is there can be increased impact on mood, there could be increases in anxiety, we know that it increases a sense of loneliness,” Hawkins said. “There is no question that when you are feeling isolated from your friends and your family that it has mental health effects.”

Petition for Rec Center to reopen leads to dead end

Mask-wearing relaxes on campus as pandemic drags on