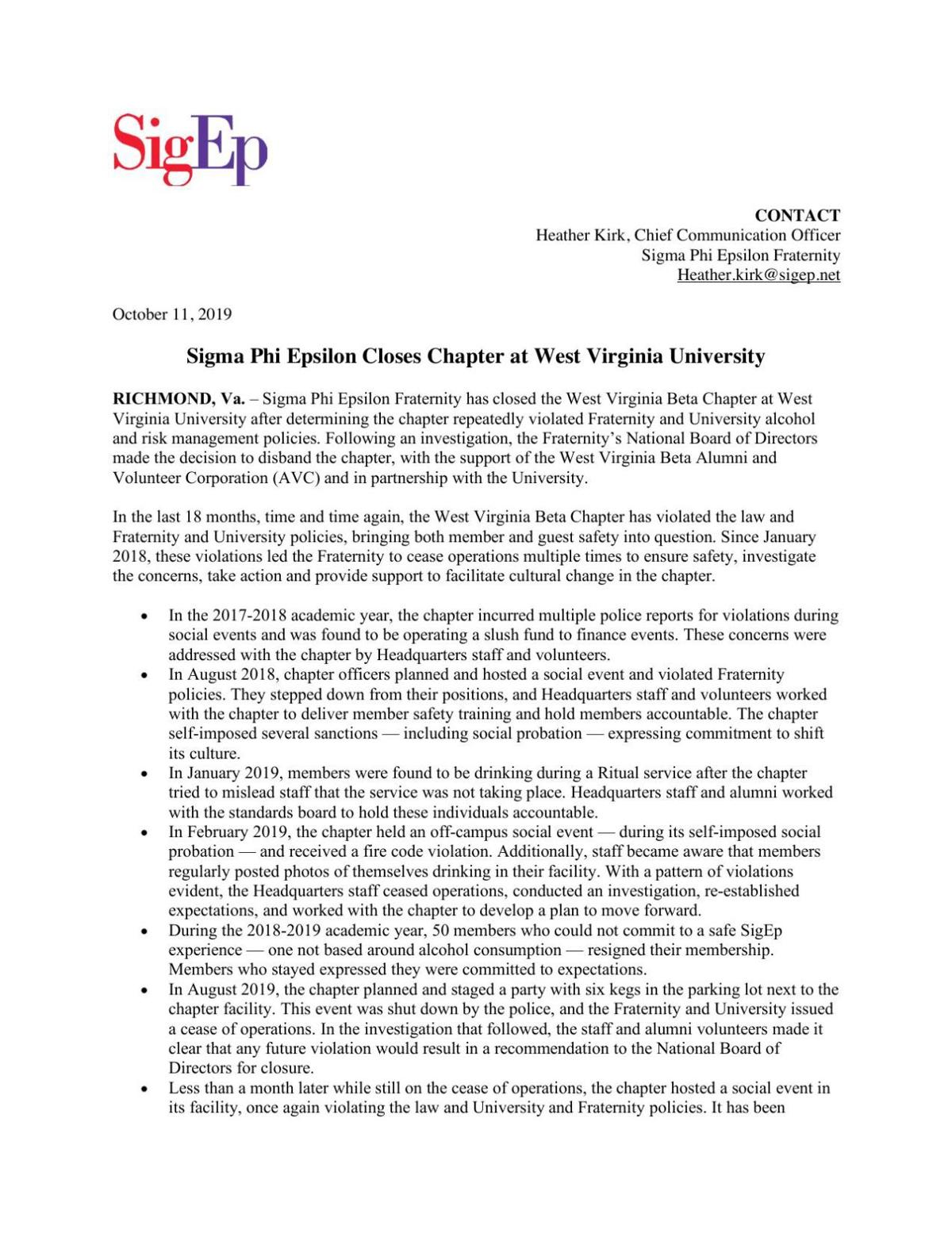 WVU’s chapter of Sigma Phi Epsilon had its charter revoked by its national headquarters, and former members will be evicted from its house at the end of the semester.

The national headquarters wrote in a Tuesday statement that in the last 18 months, the West Virginia Beta chapter had violated the law and fraternity and University policies “time and time again,” bringing both member and guest safety into question.

Since January 2018, these violations led the fraternity to cease operations multiple times to ensure safety, investigate the concerns, take action and provide support to facilitate cultural change in the chapter, according to the statement.

“They have shown that they care more about being a Morgantown drinking club than they do about SigEp’s mission and developing balanced men,” said SigEp CEO Brian Warren in the statement. “That is simply not the experience we seek to provide.”

“SigEp’s purpose is to develop balanced men who make a difference in their communities, and we expect chapters and their members to act in accordance with our values,” Warren said in a Monday statement. “In this case, members have repeatedly and knowingly violated the law and the Fraternity’s and University’s policies on risk management and substance abuse. When the cultural issues within a chapter conflict with our values and are too deeply rooted to change, SigEp will act responsibly to ensure the safety of students and other members of the campus community.”

The fraternity’s National Board of Directors made the decision to disband the chapter with the support of the West Virginia Beta Alumni and Volunteer Corporation and in partnership with the University, according to the national headquarters.

The WVU chapter said on Monday it was disappointed in the national headquarter’s decision.

Previously, the national headquarters implemented a substance-free facility bylaw, according to a press release the chapter posted on social media platforms on Monday morning. On Oct. 3, fraternity brothers contacted emergency medical services about two guests who had “shown signs of being intoxicated to the point of worry.”

“Since we’ve attended West Virginia University we’ve been strongly encouraged to alert EMS in such concerning condition, morally we did what was best for being in such a situation,” the chapter wrote in the release.

The chapter said the revocation and eviction is happening because brothers did “what any morally conscious human being would do.”

Patrick Sheehan, the chapter president, said in a text on Monday afternoon that he has no comment. When asked for comment on Wednesday, he didn’t respond.

WVU sent the following statement to the Daily Athenaeum about the revocation and eviction:

In the wake of a decision by Sigma Phi Epsilon’s national board of directors to pull the charter of the fraternity’s West Virginia Beta chapter, West Virginia University has also revoked the chapter’s status as a recognized student organization. The national office is permitting students who live in the house to remain through the fall semester, but they will have to find other housing after that. The University will assist anyone who needs help finding housing.

Failure of the chapter to comply with the direction of headquarters, alumni leaders, and/or staff of the Office of Fraternity and Sorority Life may result in further disciplinary proceedings.

West Virginia University joins the national office in wishing this had not been necessary, but the chapter’s continued violations of fraternity and university policies and procedures left no choice. Student safety is of paramount importance.

Sigma Phi Epsilon has said it hopes to be able to re-establish a chapter in the future, and when or if that happens, the Office of Fraternity and Sorority Life will assist in any way possible.

Press On: Reflections on Fraternity and Sorority Life