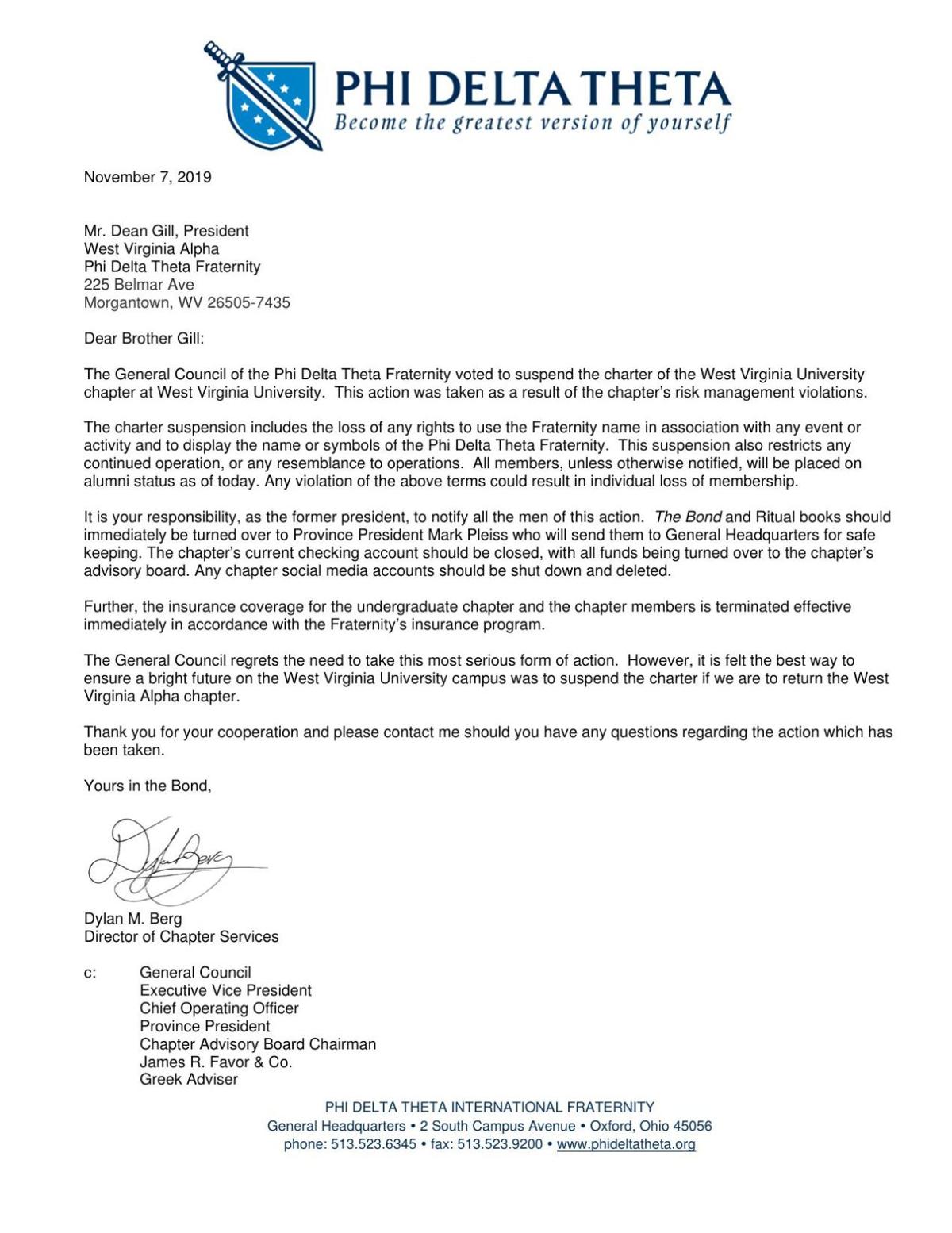 The General Council of the Phi Delta Theta Fraternity has voted to suspend its WVU chapter due to risk management violations.

The chapter would not be eligible for reinstatement at WVU until spring of 2024 at the earliest, according to a University statement.

All members, unless otherwise notified, will be placed on alumni status, according to a letter sent by Dylan Berg, director of chapter services, to the WVU chapter's president. The charter suspension includes the loss of any rights to use the fraternity name in association with any event or activity and to display the name or symbols of the fraternity.

This suspension also restricts any continued operation or any resemblance to operations, according to the letter. Membership could be lost if any of the terms are violated.

The insurance coverage for the undergraduate chapter and the chapter members is terminated effective immediately, according to the letter.

"The General Council regrets the need to take this most serious form of action," Berg wrote in the letter. "However, it is felt the best way to ensure a bright future on the West Virginia University campus was to suspend the charter if we are to return the West Virginia Alpha chapter."

The WVU statement said but the chapter's continued violations of fraternity and university policies and procedures left no choice for the action:

In the wake of the decision by Phi Delta Theta’s national board of directors to suspend the charter of the fraternity's West Virginia Alpha chapter,  West Virginia University has revoked the chapter's status as a recognized student organization.
Failure of the chapter to comply with the direction of headquarters, alumni leaders, and/or staff of the Office of Fraternity and Sorority Life may result in further disciplinary proceedings.
West Virginia University joins the national office in wishing this had not been necessary, but the chapter's continued violations of fraternity and university policies and procedures left no choice. Student safety is of paramount importance.
The chapter would not be eligible for reinstatement at WVU until spring of 2024 at the earliest.
Information about the risk management violations was not provided. Phi Delta Theta was placed under interim suspension on Oct. 22, according to the WVU Office of Fraternity and Sorority Life website.

Phi Delta Theta has only made two appearances in the WVU Crime Log so far this academic year:

The charter suspension comes only several weeks after WVU's chapter of Sigma Phi Epsilon had its charter revoked. Former members are to be evicted from its house at the end of the semester.

The national headquarters wrote in an October statement that in the previous 18 months, the West Virginia Beta chapter of Sigma Phi Epsilon had violated the law and fraternity and University policies “time and time again,” bringing both member and guest safety into question.

WVU holds first in-person commencement in over a year