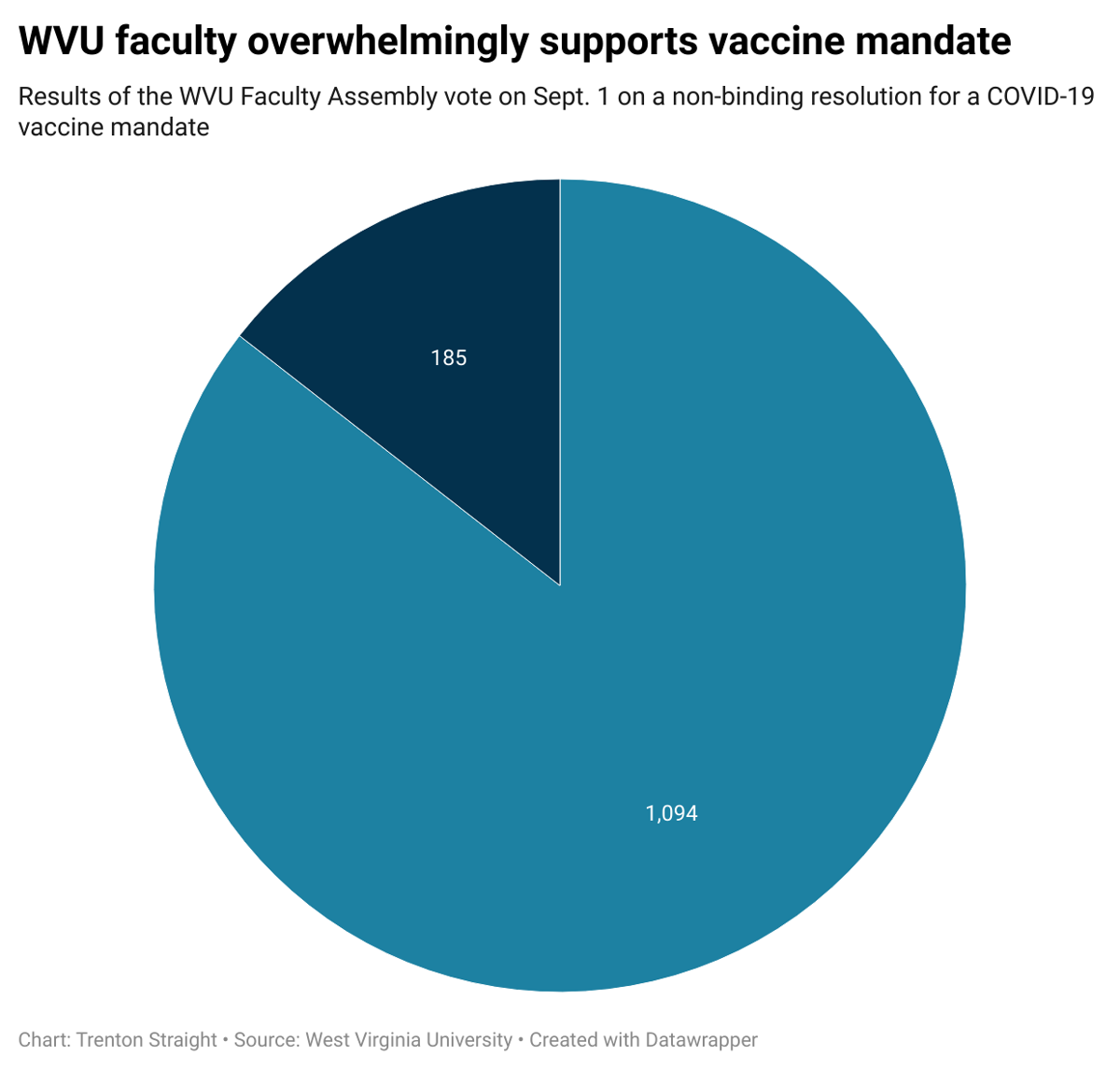 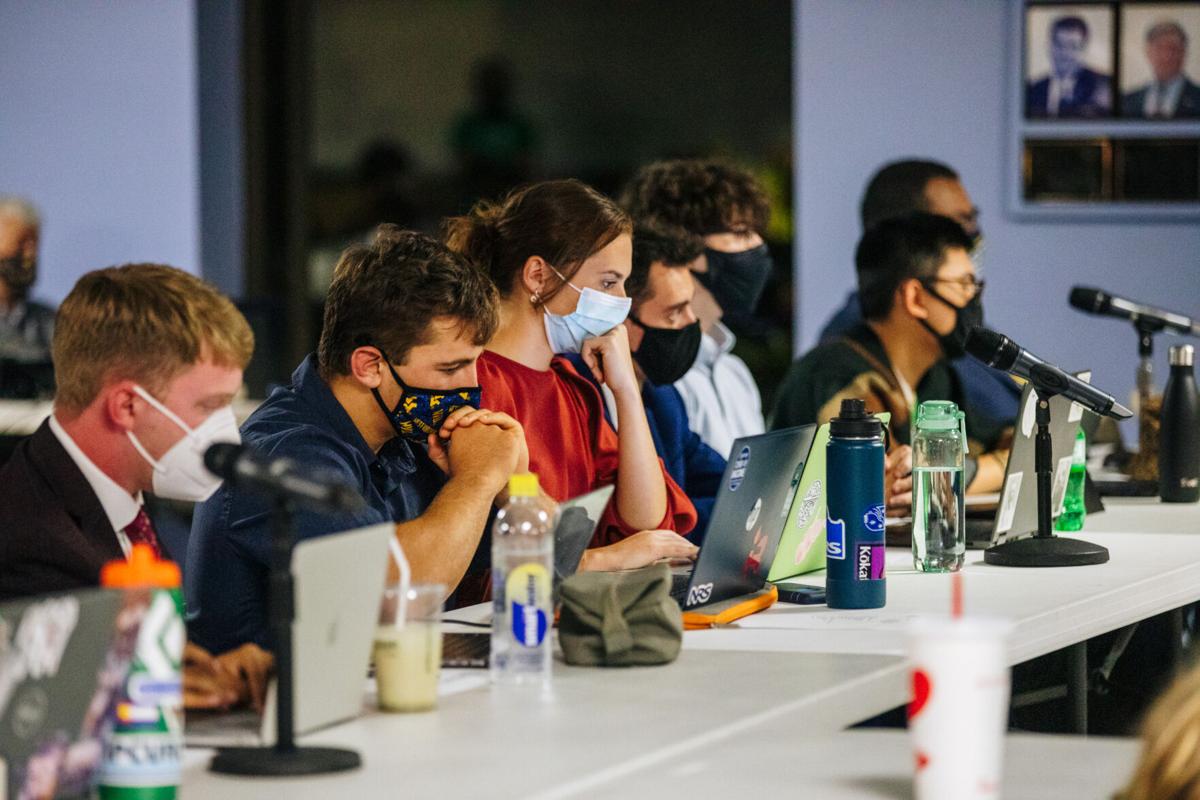 SGA senators listen to public comment during their Sept. 8 meeting.

SGA senators listen to public comment during their Sept. 8 meeting.

As West Virginia experiences the fastest acceleration of new COVID-19 cases in the nation, faculty and students at WVU are pushing administrators to mandate vaccinations.

Around three-fourths of all employees and students are vaccinated, according to statistics released by the University on Wednesday. Over the last week, vaccination rates have increased marginally.

The Student Government Association met Wednesday night to vote on a resolution in support of a vaccine mandate. The resolution is expected to pass but results were not available at the time of publication.

In a University survey of over 2,000 students conducted in April, just 29% said they were “concerned” that the WVU would strongly encourage but not require vaccination.

Over the summer, students’ attitudes toward a vaccine mandate changed.

While the students are more closely divided on a mandate, WVU faculty are largely in favor of it.

Last week, the faculty called a rare special meeting of the University Assembly, a little-known body of almost every faculty member. They voted on a non-binding resolution in support of a vaccine mandate for students and employees by Jan. 1, 2022.

The resolution passed overwhelmingly. The results were 1,094 in favor and 185 opposed.

In the face of mounting pressure from faculty and students, administrators have stood their ground and continued to “strongly encourage” but not require vaccination.

At the special meeting of the University Assembly last week, WVU President E. Gordon Gee said he urges all students and employees to get vaccinated but believes a mandate would cause further discord on campus.

“I'm just going to say this as clearly as I can. I do not believe in a mandate for this vaccine, for the COVID-19 vaccine,” Gee said. “And, in this current time, I believe that a mandate will only create more division.”

He added that the University continues to feel “confident” in its current vaccine rates, and a mandate wouldn’t be reflective of all groups across campus.

“So it's not about vaccination,” he added. “But it is about a sense of quality of free will and, what our students believe in this instance, opportunity.”

In that same meeting, Rob Alsop, vice president for strategic initiatives, said University administrators may consider a vaccine mandate in the near future.

Alsop said a mandate would only heighten staffing problems and could upset parents who are in opposition to a mandate.

“If we mandate a vaccine right now, there will be a significant amount of parents who are against the vaccine, who will rise and get likely very active in opposition,” Alsop said. “We believe we need to let the positive trends continue.”

Over the Labor Day weekend, WVU did not report any COVID-19 results. The number of people in quarantine or isolation is down from high points earlier this week, according to statistics released by the University on Wednesday,

While cases of COVID-19 are down on-campus, the virus continues to rage across the state of West Virginia.

A new report from STAT News says West Virginia has the fastest COVID-19 case acceleration of anywhere in the country.

On Wednesday, ICU patients in the state reached a record high for the entire pandemic, and the total number of COVID-19 hospitalizations was near an all-time high.

State and University health officials say the current surge of cases is driven by the more contagious delta variant and will crest in the next two weeks.

“As this variant continues to burn itself out, we predict it may take as much as another five to seven or maybe as many as 10 to 14 days for that to happen,” said West Virginia Coronavirus Czar Clay Marsh during the state COVID briefing Wednesday.

Marsh added that he encourages vaccination but that the current surge of cases cannot be stopped by vaccines.

"It has already started, and it will need to consume itself out,” he said.

Vaccine mandate vote absent from WVU Board of Governors agenda