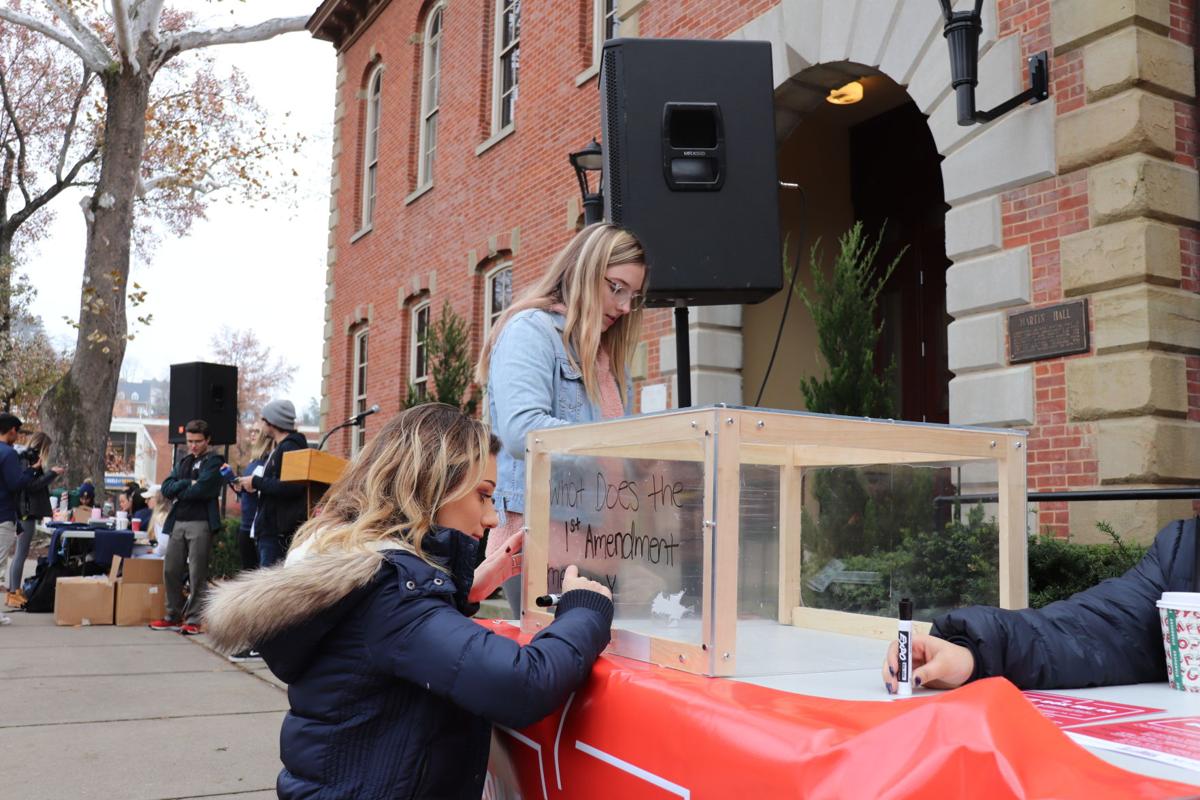 WVU students write on the glass box labeled, "What does the First Amendment mean to you?" outside of Martin Hall. 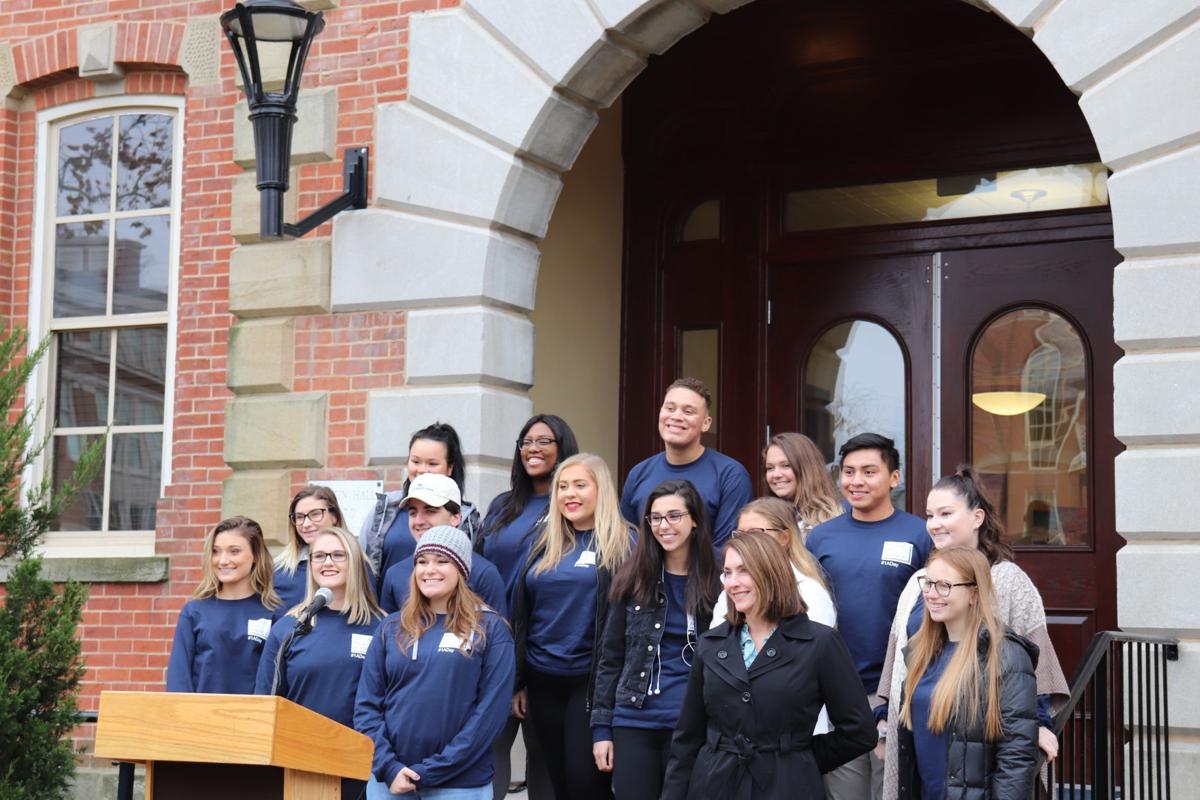 The Martin Hall Agency poses in front of Martin Hall during the "Don't Box Me In" First Amendment event on Wednesday. 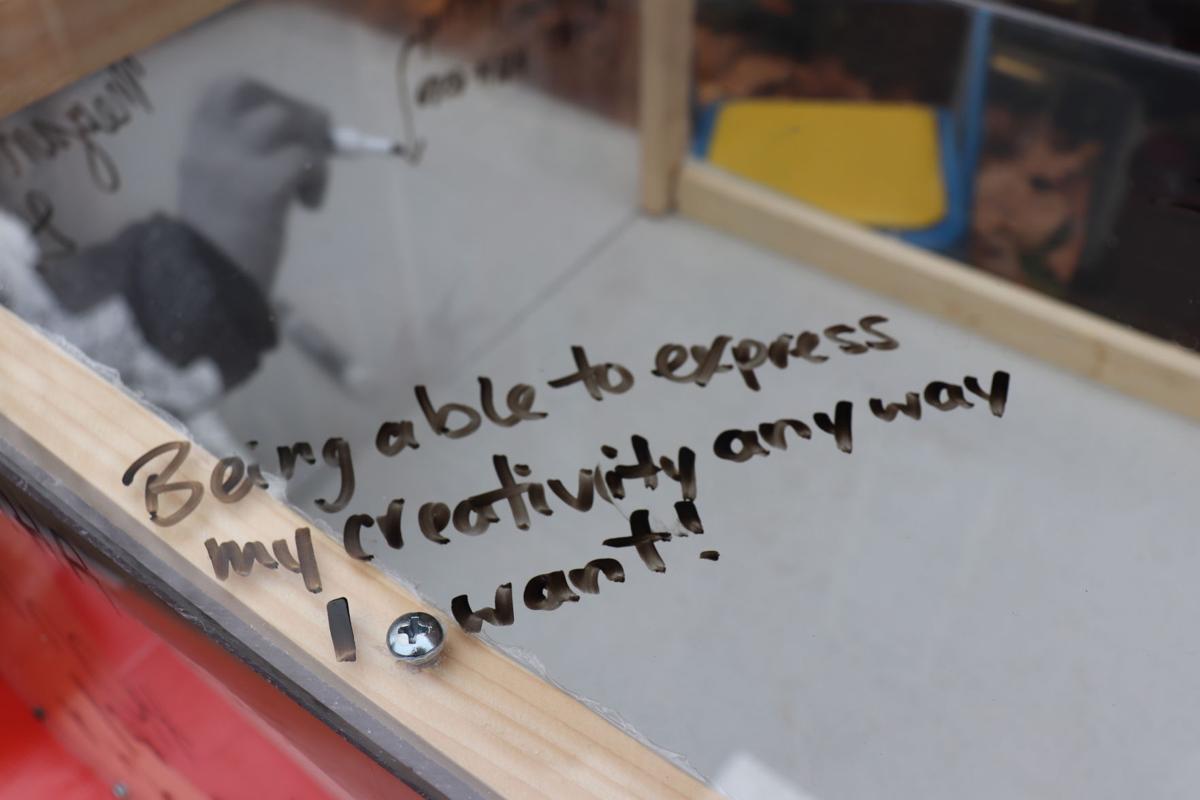 WVU students write on the glass box labeled, "What does the First Amendment mean to you?" outside of Martin Hall.

The Martin Hall Agency poses in front of Martin Hall during the "Don't Box Me In" First Amendment event on Wednesday.

The Martin Hall Agency held a daylong “Don’t Box Me In” event to inform students about the importance of the First Amendment. The event featured a reading of the Amendment, library exhibits, a panel discussion and trivia night.

“In all of human history, we live in a unique sliver of time in which we are guaranteed the right to serve a watchdog role over those who hold influence and control,” Soule said.

At the reading, a glass box was available for students and those passing by to write what the First Amendment means to them. There were also shirts available for purchase and free coffee.

“The importance of the event is to highlight free speech for not only the Reed College, but all students who are at WVU,” said Caroline Carey, a senior strategic communication student who helped with the event. “This is to really educate students who don’t really know about what the First Amendment is or what it means personally to them.”

Carey said the event was a great way to get everyone together and show their support on the subject, as well as connect those who want to know more about it to the Reed College of Media.

Later, the “Don’t Box Me In” event moved to the Media Innovation Center where four panelists discussed how the First Amendment is used in today’s society and what rights each American citizen has under it.

“You have the right to engage in that political dialogue and not only is it a right, it’s critically important for us to have elections, to have dialogue; to have schools like this,” Samuelson said. “We need people talking freely about issues.”

The panelists also discussed how the First Amendment exists currently in social media.

“Today’s court and today’s law is treating social media like they would treat any other public forum, so a public forum is a sidewalk outside, it’s that free speech zone downtown, it’s the streets, it’s busses, it’s anywhere you can come together,” Samuelson said. “Once a public forum opens up, the government has to let that discourse happen and that’s how the internet works.”

Beeson then spoke about hate speech and the reason it is still protected under the First Amendment.

“The problem with social media is the algorithms used to drive your feed are giving you more and more of what you believe in,” Beeson said.

Beeson explained how some social media sites have algorithms that learn data like someone’s habits, behaviors and likes or dislikes.

“All of those things go into this determination by the computer of what you are susceptible to and what you might be moved by, so what happens is if you start liking one thing, it wants to give you more of that and this is tied to the economic model of social media.”

He said this is a serious threat to democracy and that some people are purposely spreading chaos and misinformation.

The panel discussion was followed by a Trivia Night at Terra Cafe where participants could test their knowledge on the First Amendment.

Seasonal affective disorder, and why it’s more than just the winter blues

Gee to miss December commencement due to hip surgery recovery