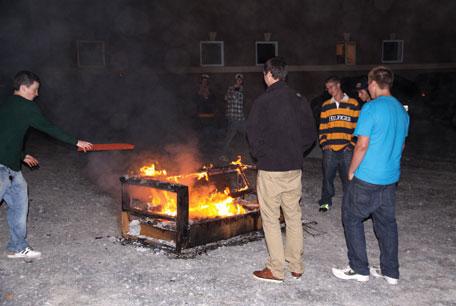 Students gather around a burning couch after West Virginia’s 48-45 victory against Texas on October 8, 2012 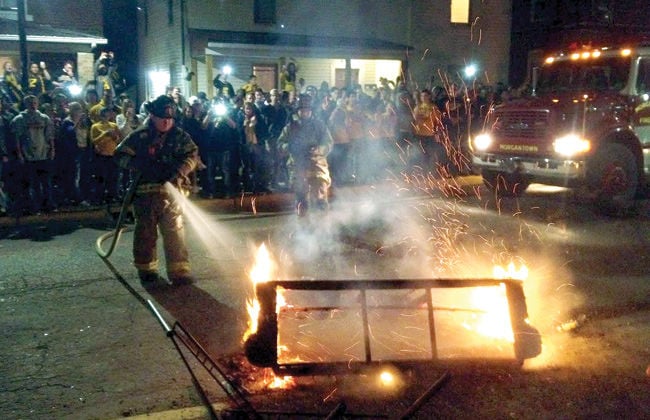 In this October 8, 2012 file photo, a firefighter puts out the fire of a couch burning after West Virginia 48-45 victory over Texas.

Students gather around a burning couch after West Virginia’s 48-45 victory against Texas on October 8, 2012

In this October 8, 2012 file photo, a firefighter puts out the fire of a couch burning after West Virginia 48-45 victory over Texas.

Since the City of Morgantown made couch burning illegal in 2015, the memories of incinerated three-seaters have lived on in the minds of alumni. Just not on West Virginia University’s official Facebook page.

“Couch burning” is one of 25 words and phrases banned from comments and posts on the main WVU Facebook page, according to social media settings received through an open records request submitted by the Daily Athenaeum. The other 24 banned keywords are a string of vulgarities in a variety of correct and incorrect spellings.

None of the other words could be printed in this newspaper.

“’Couch burning’ is a term that was added years ago when it was of much larger concern to the University after a few disappointing situations following athletics victories,” said WVU Senior Director of Marketing Tony Dobies in an email. “While it is on the list you received, we would not block a comment that included the phrase ‘couch burning’ on any of our University-owned social media accounts. Thankfully, we rarely see that phrase in our comments on Facebook.”

In addition to this blacklist of muted words, the University has Facebook’s built-in profanity filter set to strong. Facebook does not disclose the list of words blocked by either of two possible settings of the profanity filter.

Couch burning was banned in 2015 by an unanimous vote of the City Council. The goal was to “change the tradition to a new favorable one in Morgantown,” said then-Council member Jeff Mikorski.

Nearly a third of the universities surveyed use a custom blacklist. Collectively, these 59 universities censor 1,825 words. Universities across the country have blocked the names of football rivals, terms related to campus controversies, and even an emoji.

Clemson University blocked all mentions of “Harambe” after memes of the gorilla created campus controversy. Suffolk County Community College blocks a variety of terms related to inclement weather closings and delays such as “blizzard” and “snow.”

Texas A&M University has banned references to “hook ‘em” horns, a popular gesture for the rival Longhorns of Texas University at Austin. University of Washington has blacklisted a variety of reference to mascots of rival schools.

Facebook commenters wanting to mock the University of Mississippi will be disappointed to find that “fail state,” a play its “Hail State” motto, is blocked.

In addition to frivolous-seeming keywords, many universities use filters that discriminate against criticisms from disgruntled employees, accusation of rape culture and the work of animal rights activists. The FIRE survey found many of the custom blacklist filters employed by universities would not stand up to first amendment scrutiny.