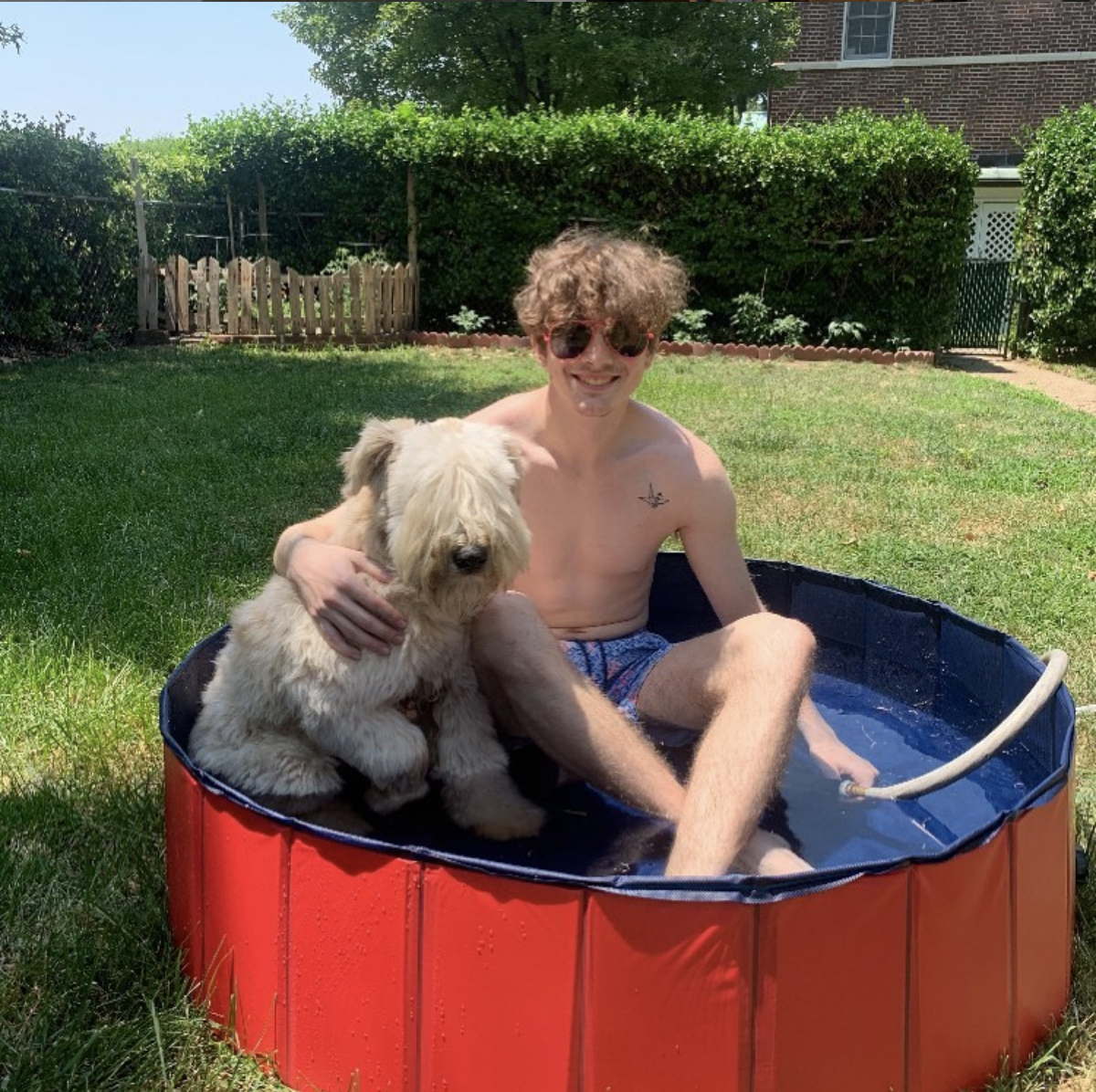 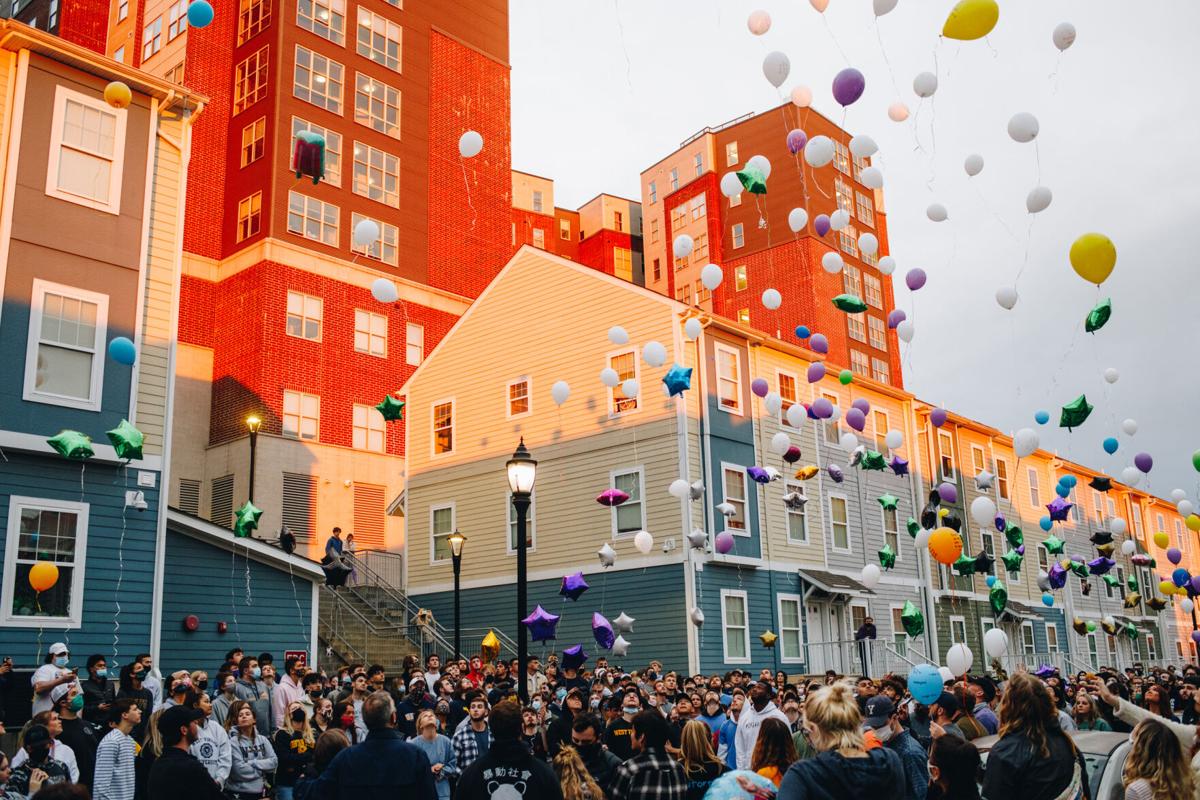 Balloons lift into the air at a send-off for Benjamin Pravecek on Sunday night.

Alyssa Myers and Ben Pravecek are photographed in this selfie. The two met in August 2020 and began dating in November of the same year.

Balloons lift into the air at a send-off for Benjamin Pravecek on Sunday night.

Alyssa Myers and Ben Pravecek are photographed in this selfie. The two met in August 2020 and began dating in November of the same year.

Pravecek enjoyed painting, spending time with his girlfriend and hanging out with his fraternity brothers.

Malloch Henderson, one of Pravecek’s close friends, shared some of his favorite memories.

“He was very off the wall,” Henderson said. “He had a lot of little niche hobbies and things that he liked that were very unique to him, and he was pretty fearless when it came to doing anything.”

Pravecek also loved origami, according to Henderson. He had a tattoo of an origami crane, right by his heart, and he used to fold origami cranes freshman year for other people.

“He just loved ramen noodles; any kind. He actually had a pair of pants, ramen noodle pants that he loved,” Henderson said. The two met as freshmen in Lyon Tower where they lived on the same floor, and Henderson said Pravecek was one of his first friends at WVU.

He had a liking toward Japanese commodities like Pocky sticks and Hello Panda crackers, and the only type of pencil that he would use, he would order directly from Japan.

Henderson, a member of the WVU rugby club team, recruited Pravecek to join the team last spring before the University shut down for COVID-19. Pravecek hadn’t played the sport before, but he joined the team and was said to have played with a lot of heart.

Pravecek was also an avid volleyball player. One of Henderson’s favorite memories was the weekly trips to the volleyball courts at the Student Rec Center that Pravecek organized. Henderson loved watching how effortless the sport was for him.

“It was incredible, just seeing how skilled he was at it without even trying,” he said.

Another thing that appeared effortless for Pravecek was math and his sense of humor, according to his girlfriend Alyssa Myers. The freshman criminology student met Pravecek through Henderson.

Myers remembers asking Pravecek for help on a math problem that she was struggling with. He quickly finished, sent her the answer and made a joke about how easy it was. “He was so smart,” Myers said.

She had joked back, saying that he made her cry and she remembers him replying, “You're such a kind and sweet person, and while you may be absolutely terrible at math, I'm 110% sure that you could soar high above me in any other subject.”

The two met in August of last year during Myers’ first week on campus. They quickly became friends and started dating in November 2020. The two shared a connection with art and especially music. Myers said Pravecek was a saving grace during a time where she struggled to adjust to college.

“When I got to West Virginia, I was so scared,” she said.

Myers had struggled with her mental health throughout high school and reached a low point her junior year. It was then that she promised herself that once her health improved, she would visit the Van Gogh Museum in Amsterdam.

The very next day, she met Pravecek wearing a Van Gogh mask.

The two had made loose plans to visit the museum one day, but Myers was never able to tell Pravecek the reason why that trip would mean so much to her.

WVU Police responded to a call at 12:30 p.m. on April 16 after reports that someone had either fallen or jumped from the University Place parking garage and landed on the sidewalk on University Avenue. The police later confirmed Pravecek died from the fall.

Myers said that Pravecek possessed a positive energy that was contagious. He made everyone around him feel happy and cared for.

Pravecek touched many lives in the WVU community and that was on display on April 18, when hundreds participated in a balloon send-off on Grant Avenue in his memory.

The brothers of Lambda Chi Alpha, the fraternity Pravecek was a member of, created a GoFundMe to raise money for his family that will be spent towards mental health organizations and advocates around the area of Morgantown, WV to help spread awareness. To donate, visit tinyurl.com/InMemoryOfBenPravecek

Patrick Orsagos is the Digital Managing Editor of the Daily Athenaeum. He is a second year graduate student pursuing a master's degree in journalism from Avon, Ohio.

WVU Rec Center to reopen in mid-May, will require reservations