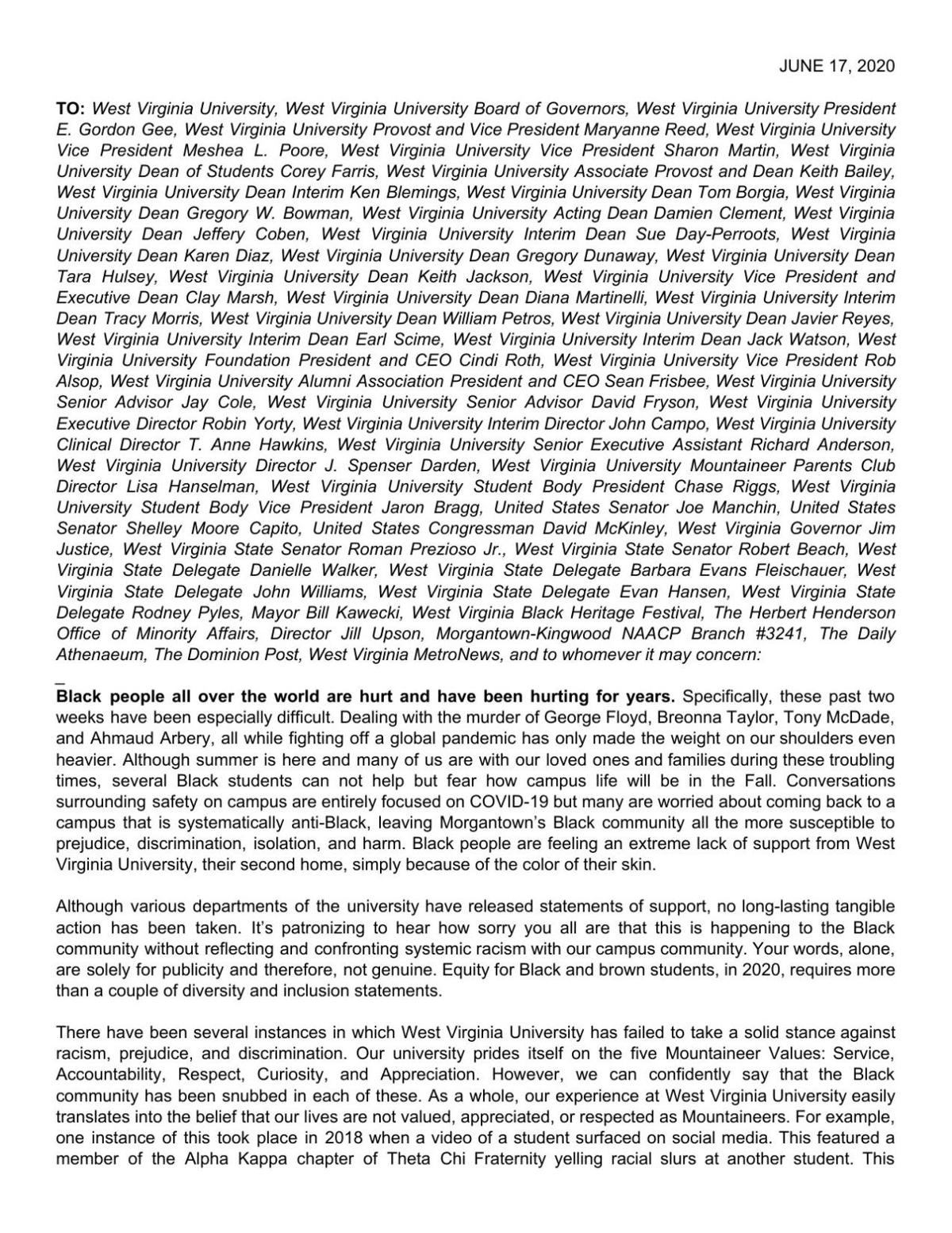 A petition authored by the “Concerned Black Community” of West Virginia University is calling for a “swift, progressive change” in regard to diversity and inclusion on campus, and is demanding that more action be taken by the school on behalf of the Black community.

“We are done having conversations that are built upon no action and serve only as a checkbox for diversity or improve public relations,” the petition reads. “The Black community is not adequately supported at West Virginia University. We do not have equitable resources or support. As our state’s flagship university, we expect better. We deserve better.”

The petition lists nine demands of the University, including mandatory diversity and anti-racism training for staff, students and faculty, revisions to campus codes of conduct regarding racial insensitivity, financial enhancements for co-curriculars and initiatives for people of color, a reevaluation of responsibilities for WVU’s Division of Diversity, Equity, and Inclusion and the Center for Black Culture and Research, a guaranteed amount of graduate assistantships for Black students and increased academic opportunities for students to study Blackness, African-American studies and Africana coursework.

The petition calls for most of these ideas to begin being implemented “no later than the Fall of 2020 and all to be implemented by Spring 2021.”

"If changes aren’t made and our demands aren't met, this would not only be a 'bad look' for West Virginia University, but it would show that they do not care to address our legitimate concerns and believe that Black lives do not matter. It would prove that their statements of support are disingenuous and performative and that WVU does not wish to take real action," a member of the community told the Daily Athenaeum.

The petition is signed off by the “concerned Black students, faculty, staff, alumni and community allies of West Virginia University.”

More than 3,000 words in length, the petition is addressed to more than 50 parties, including University President E. Gordon Gee, the University’s deans, West Virginia Gov. Jim Justice and three members of West Virginia’s United States congressional delegation, among others.

In the weeks following the May 25 death of George Floyd, a Minneapolis man who suffered grave injuries while being held in police custody, protests took place nationwide advocating for criminal justice reform and a greater emphasis on diversity and inclusion.

West Virginia University and members of administration released a variety of statements addressing the social unrest.

Let me be clear: West Virginia University will not tolerate any form of racism, discrimination or bias on our campuses. And we will always address areas of concern with open eyes and open hearts.My letter to our campus community: https://t.co/zgaXooQjQ4

“Violence and hate breed violence and hate, and this is a time when we all need to come together and continue to lean on our core Mountaineer values.”A joint letter from VP of Diversity, Equity, and Inclusion Meshea Poore and UPD Chief W.P. Chedester: https://t.co/VEy6icPGgn

Despite the public statements of support, the petition calls for actual action to be taken by the University.

“Although various departments of the university have released statements of support, no long-lasting tangible action has been taken,” the petition states. “It’s patronizing to hear how sorry you all are that this is happening to the Black community without reflecting and confronting systemic racism with our campus community.”

The petition makes note of race-related events that have happened on campus in recent years, such as a 2018 video of a student using racial slurs and a 2019 incident with a baby doll in blackface, and claims that “in both of these instances, no further action was taken to prevent this from happening again or to enact real institutional change.”

“Our time, effort, and emotional labor have repeatedly been exploited,” the petition reads. “Too many of us have been tokenized. We are not just Black faces on a college admissions pamphlet to showcase your ‘diversity.’ We are tired. We are angry. We are not proud of West Virginia University. You have repeatedly shown us that Mountaineers are not always free.”

Correction: A technical error attached an old version of the petition to this post. It has since been replaced by the version presented on Wednesday morning.

West Virginia University Board of Governors Chairman David Alvarez opened Friday's board meeting by, among other things, addressing a petition…