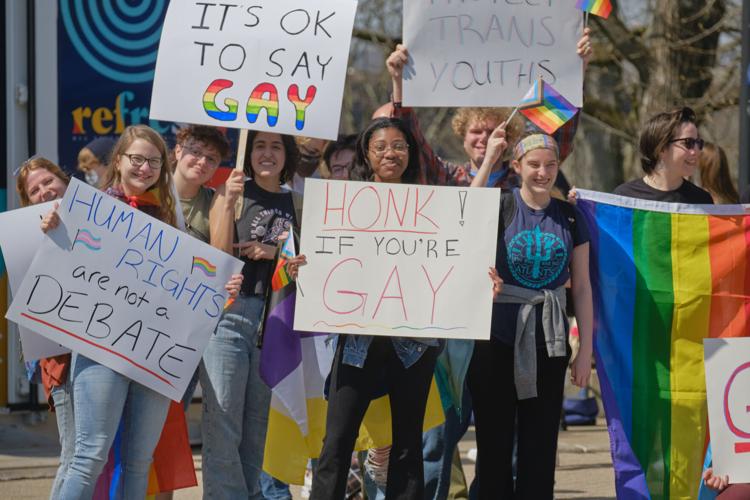 A group of students stand outside the Mountainlair to protest anti-LGBTQ legislation. 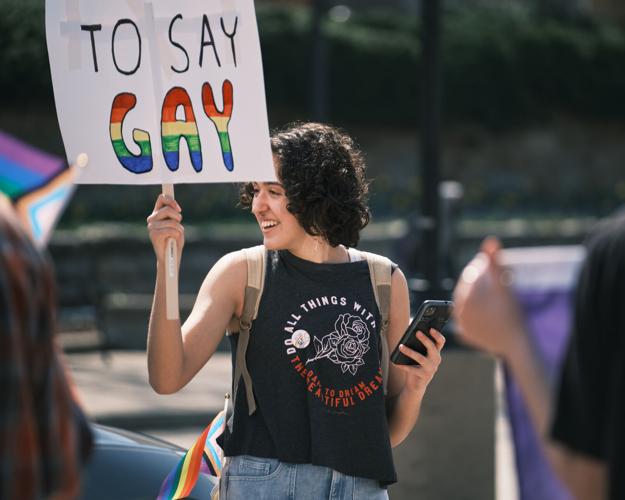 A WVU student holds a sign during a protest against anti-LGBTQ legislation. 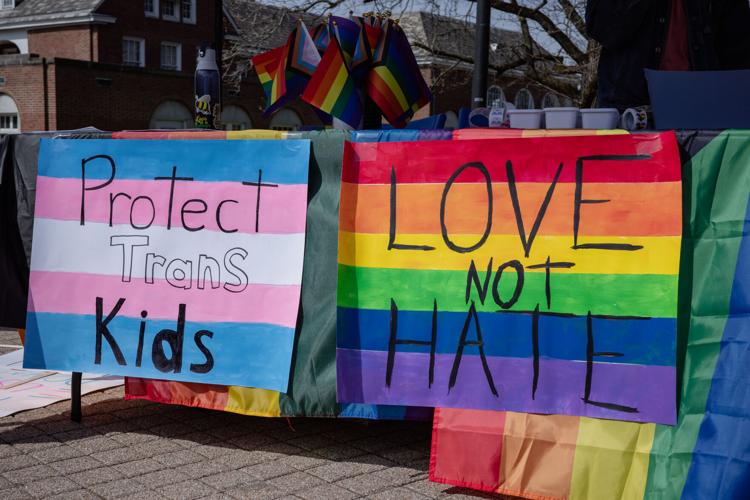 Banners hang outside the Mountainlair in support for Trans Day of Visibility. 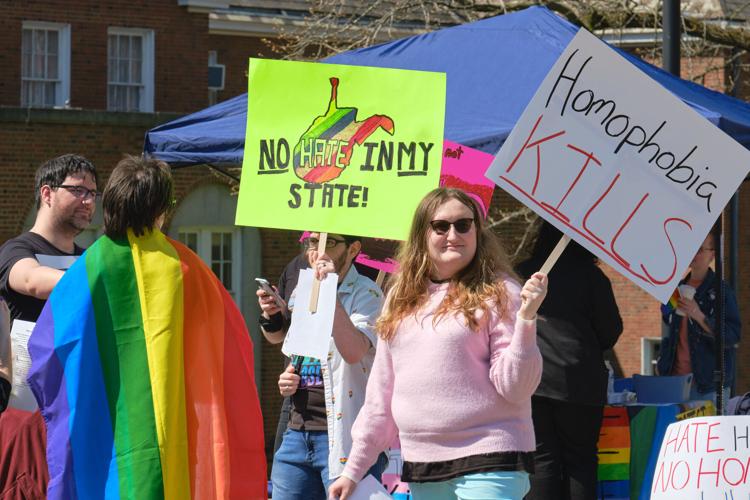 Students rally in support of transgender people ahead of the Transgender Day of Visibility. 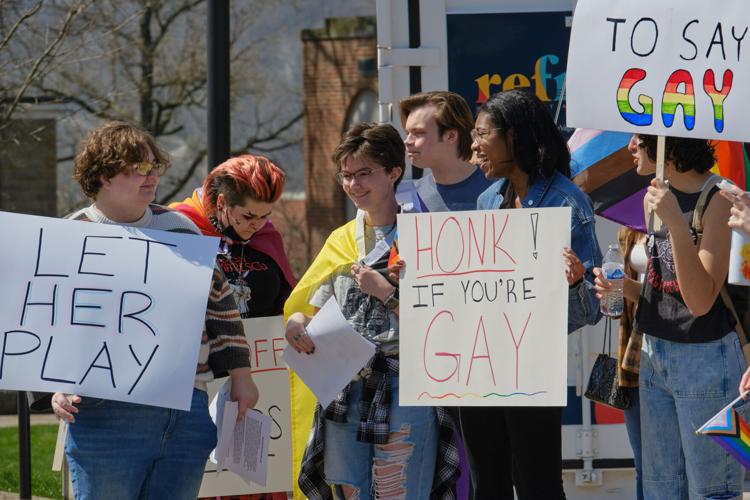 Students rally in support of Trans Day of Visibility outside the Mountainlair. 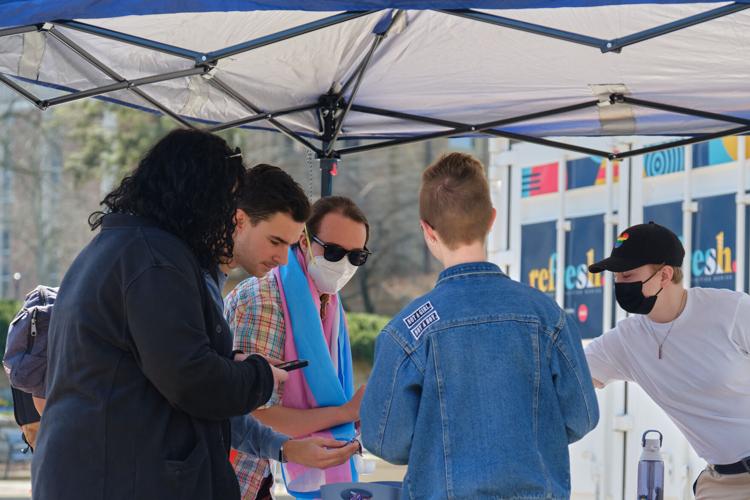 A group of students stand outside the Mountainlair to protest anti-LGBTQ legislation.

A WVU student holds a sign during a protest against anti-LGBTQ legislation.

Banners hang outside the Mountainlair in support for Trans Day of Visibility.

Students rally in support of transgender people ahead of the Transgender Day of Visibility.

Students rally in support of Trans Day of Visibility outside the Mountainlair.

Dozens of WVU students gathered outside the Mountainlair on March 30, ahead of the Transgender Day of Visibility, to highlight achievements made by transgender individuals and spread awareness about the discrimination facing transgender and gender-nonconforming people.

The event was organized by members of the WVU LGBTQ+ Club, which became an official student organization later that night at the WVU Student Government Association meeting.

The demonstration was also in response to anti-LGBTQ+ legislation across the country. In Florida, the “Don’t say Gay Bill,” which bans the discussion of sexual orientation in classrooms is currently moving through the statehouse as well as Texas legislation to investigate parents of trans kids for child abuse.

Eri Robison, a transgender student who attended the protest, is disturbed by those bills.

“It's really upsetting to me,” Robison said. “And so I want to be here to raise awareness that we exist and we're not monsters and we just want to be treated like other people.”

Trans Day of Visibility was started in 2009 by activist Rachel Crandall in order to create more recognition of transgender people within the LGBTQ+ community. Transgender Day of Remembrance, which honors trans people who have been murdered as a result of transphobia, already existed. Trans Day of Visibility, however, acknowledges and celebrates transgender people who are currently living.

Hana Barrett, a non-binary student and an organizer of the demonstration, also spoke on the importance of Trans Day of Visibility.

There was also a booth that contained informational flyers. One described the anti-LGBTQ+ legislation being passed across the country and the other had information on the Equality act, which would protect LGBTQ+ citizens from various forms of discrimination.

Along with the flyers, the booth also contained mini pride flags as well as handmade stickers and pins.

Many of the protestors flew the flags provided to them, as well as various larger pride flags. The protestors also carried signs and cheered various chants.

Drivers who were passing by would often honk their horns at protestors in support of their cause. While the protest received much support from the student body, there were those who opposed the demonstration.

“Obviously we've had a few people coming out and booing us and stuff,” Barrett said. “But in general, the campus community has been so positive.”

Shannon Dickerson, the other organizer with Barrett, shared her appreciation for those who joined the protest.

“I’m extremely proud of the work we did today, and I’m thankful for everyone that joined us,” Dickerson said in an email.

While Barrett and Dickerson organized the event, the WVU LGBTQ+ Club sponsored the event. Sophia Harker, the event director for the club, was in attendance and spoke on the importance of standing by trans people through adversity.

“We need to get that message out there and know the trans people are real. They're here and they deserve to not have violence against them in any way,” Harker said in an interview. “And they deserve to be able to access the medical treatment they need for affirmation surgery, for hormone blockers.”

Luke Blain is a podcast host for the Daily Atheneum. He is from Point Pleasant, WV and is studying sports media as a freshman.

Working over the summer, Gee says campus gets ‘a little bit lonely’

Countdown to Start of Fall 2022