The West Virginia University Faculty Senate will hold a vote of no-confidence in the current academic administration of President E. Gordon Gee and Provost Maryanne Reed.

The vote will be held during a meeting on Monday at 3:15 p.m. over Zoom. The resolution was added to the agenda on Wednesday.

The resolution that faculty senators will be voting on lists reasons for the vote that include the lack of a campus COVID-19 vaccine mandate, hiring practices, lack of transparency in ongoing Academic Transformation and "a pattern of failing to respect shared governance."

If the vote of no confidence passes, it would be a non-binding resolution where faculty senators formally announce that they no longer support the administration in power. The WVU Board of Governors, not the Faculty Senate, ultimately determines who leads the institution.

The Faculty Senate is a collection of over a hundred faculty members from across the University and includes delegations from each college and school at WVU as well as divisional campuses in Keyser and Beckley.

On two separate occasions this fall, WVU faculty called on administrators to require the COVID vaccine for students and employees.

In early September, faculty members called a rare assembly of almost every faculty member and voted overwhelmingly in favor of a campus-wide COVID-19 vaccine mandate. That same week, the WVU Student Government Association passed a non-binding resolution with similar demands.

University administrators repeatedly expressed confidence in vaccination rates as a reason not to mandate the vaccine and said that a mandate would not be most effective. Over 80% of students and 90% of employees at WVU’s Morgantown campus have been vaccinated.

The resolution states that there has been a lack of transparency in the administration’s ongoing Academic Transformation initiative. This process has led to the combination of two colleges into one and the discontinuation of 15 degree programs — primarily in the arts.

“The Gee-Reed administration has refused to engage in open, inclusive, systematic practices for hiring qualified candidates for its senior administrative team, including in units and positions that are as crucial for ensuring safe, respectful, and inclusive workplaces as the Provost’s Office, the Division of Diversity, Equity, and Inclusion, and campus president,” the statement reads.

The resolution also states that the Gee-Reed administration has “exhibited a pattern of failing to respect shared governance and working outside of professional norms” that has weakened the University’s campus climate and reputation. 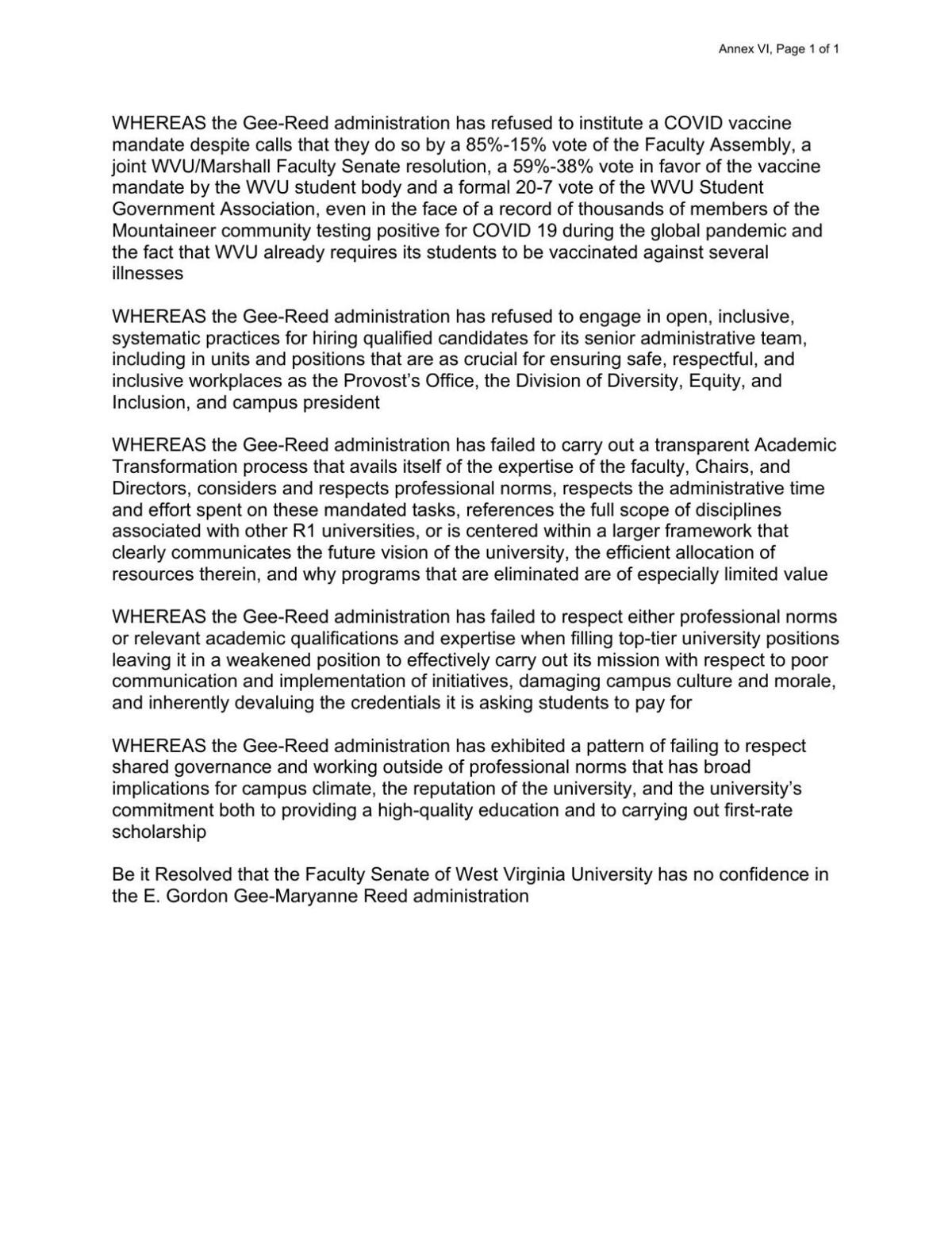 The two-month battle for a vaccine mandate at WVU

WVU is giving students $27 million in COVID grants. You could be eligible.

‘An Advocate for All’: Delegate Danielle Walker honored with MLK Achievement Award

Countdown to Next Men's Basketball Game