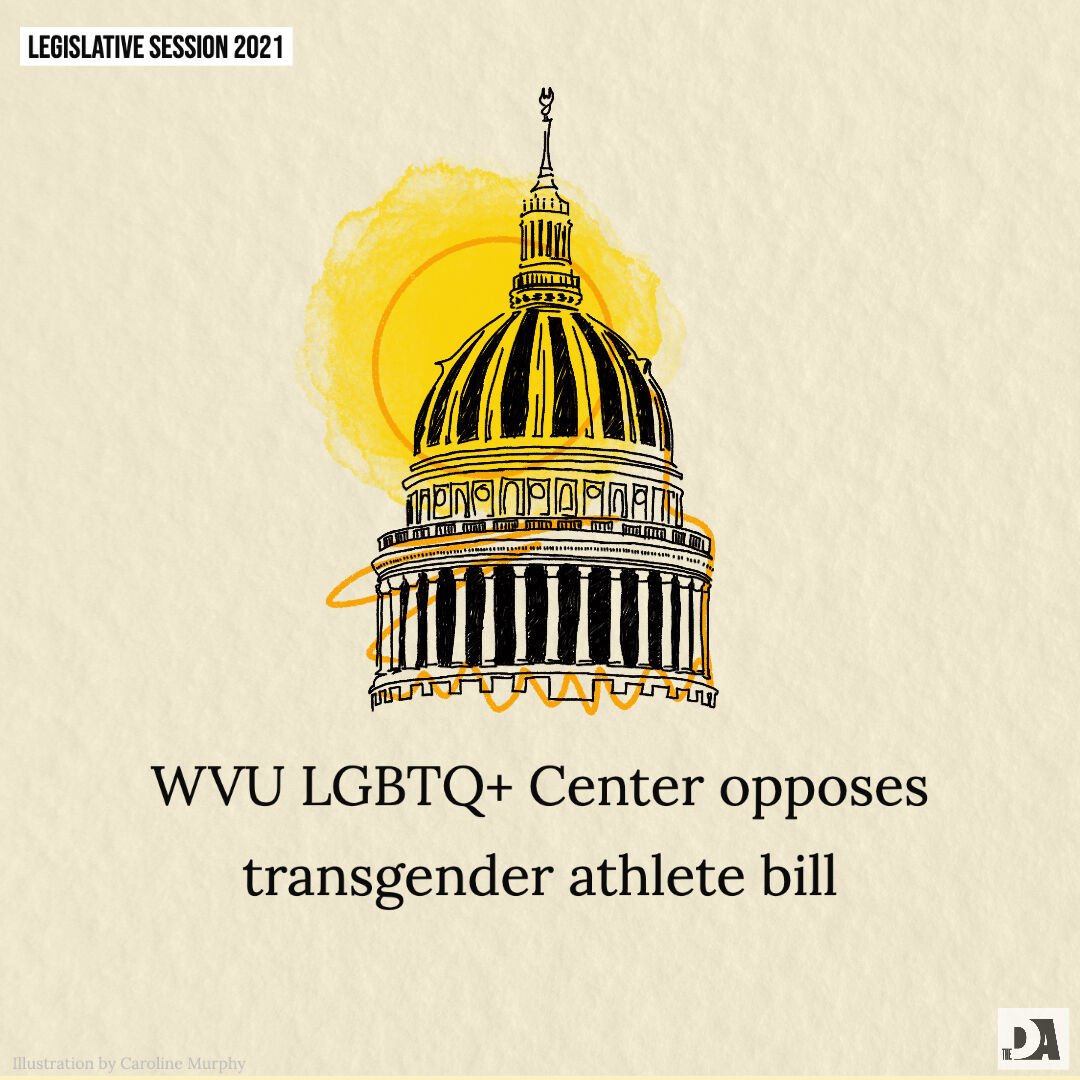 A graphic depiction of the Capitol building in Charleston, West Virginia. 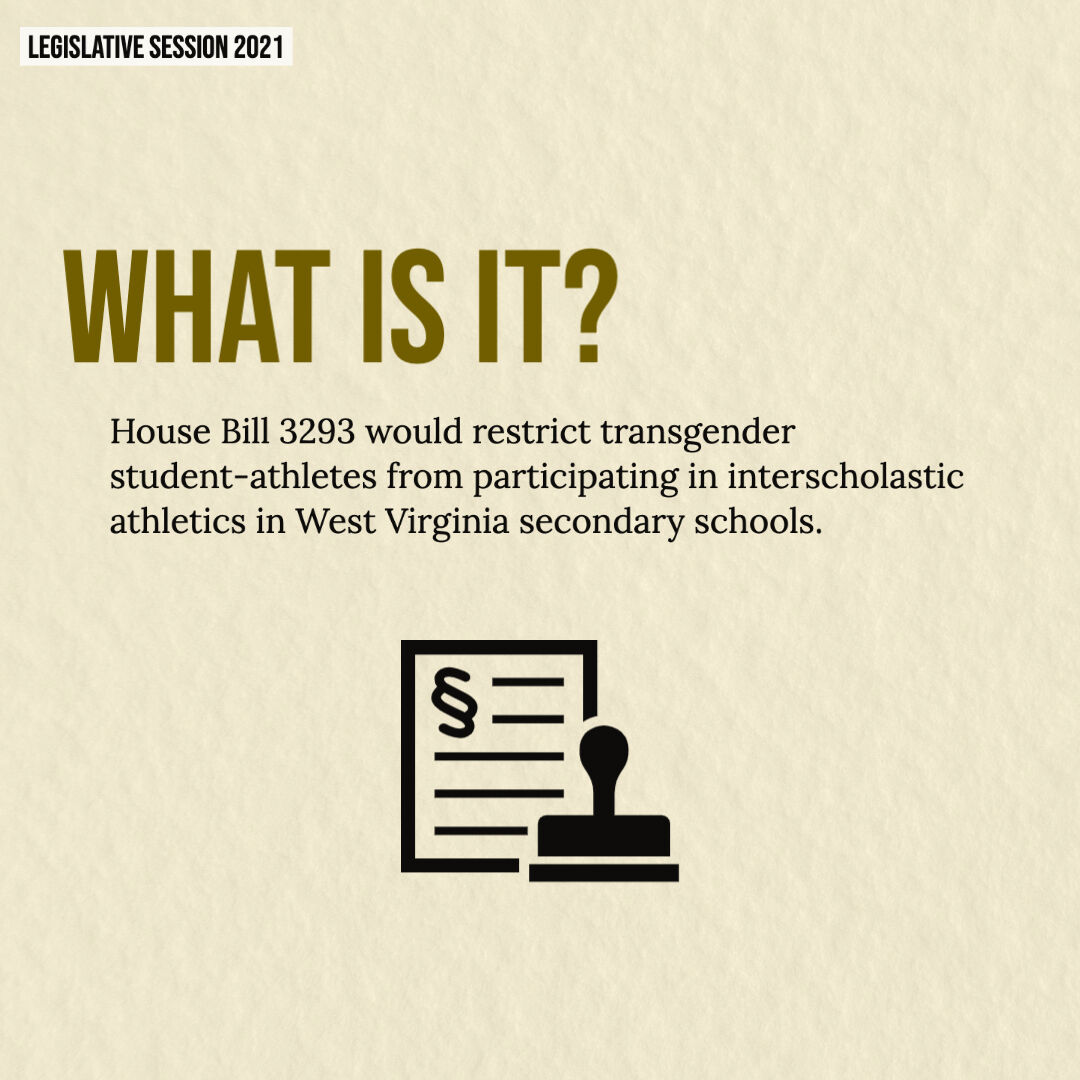 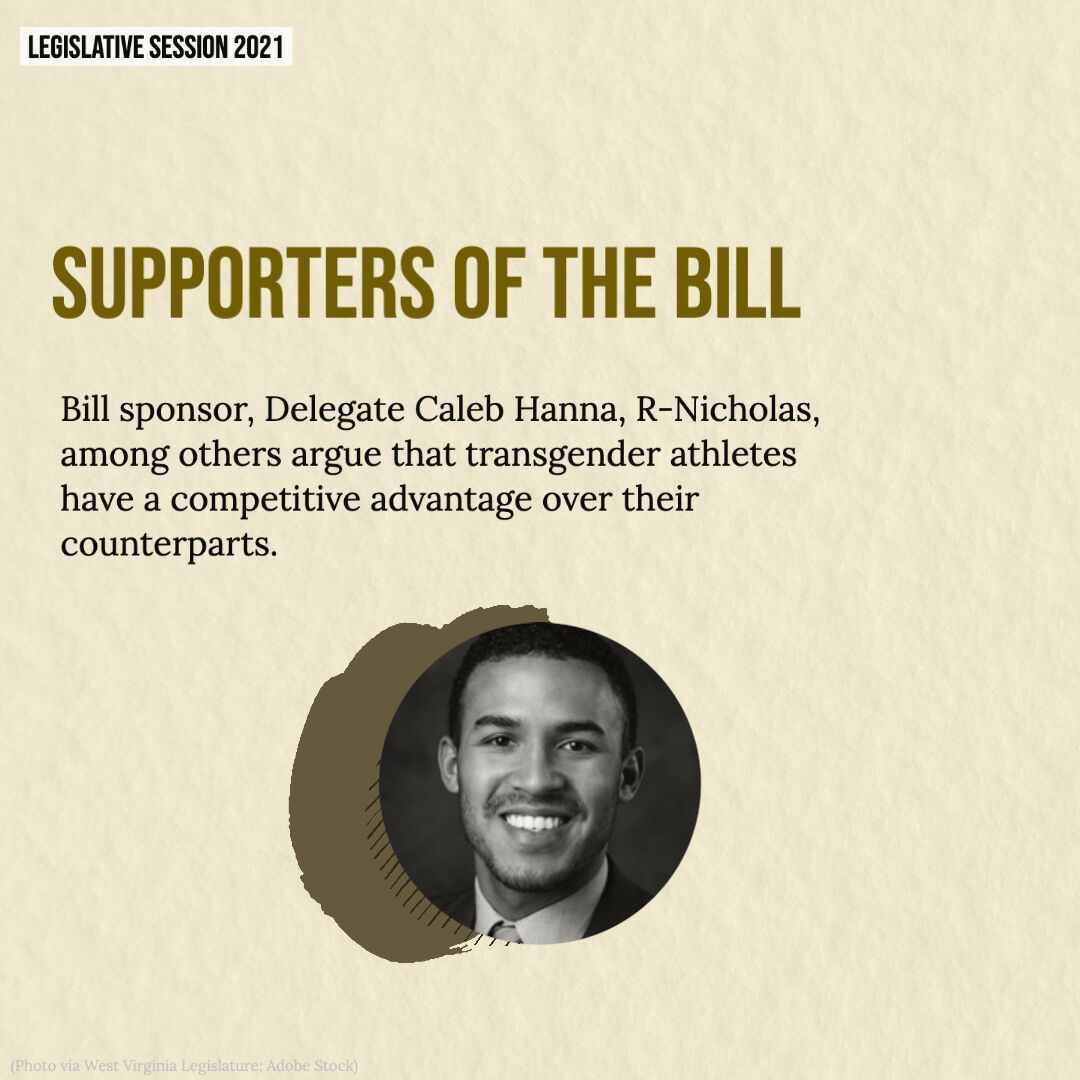 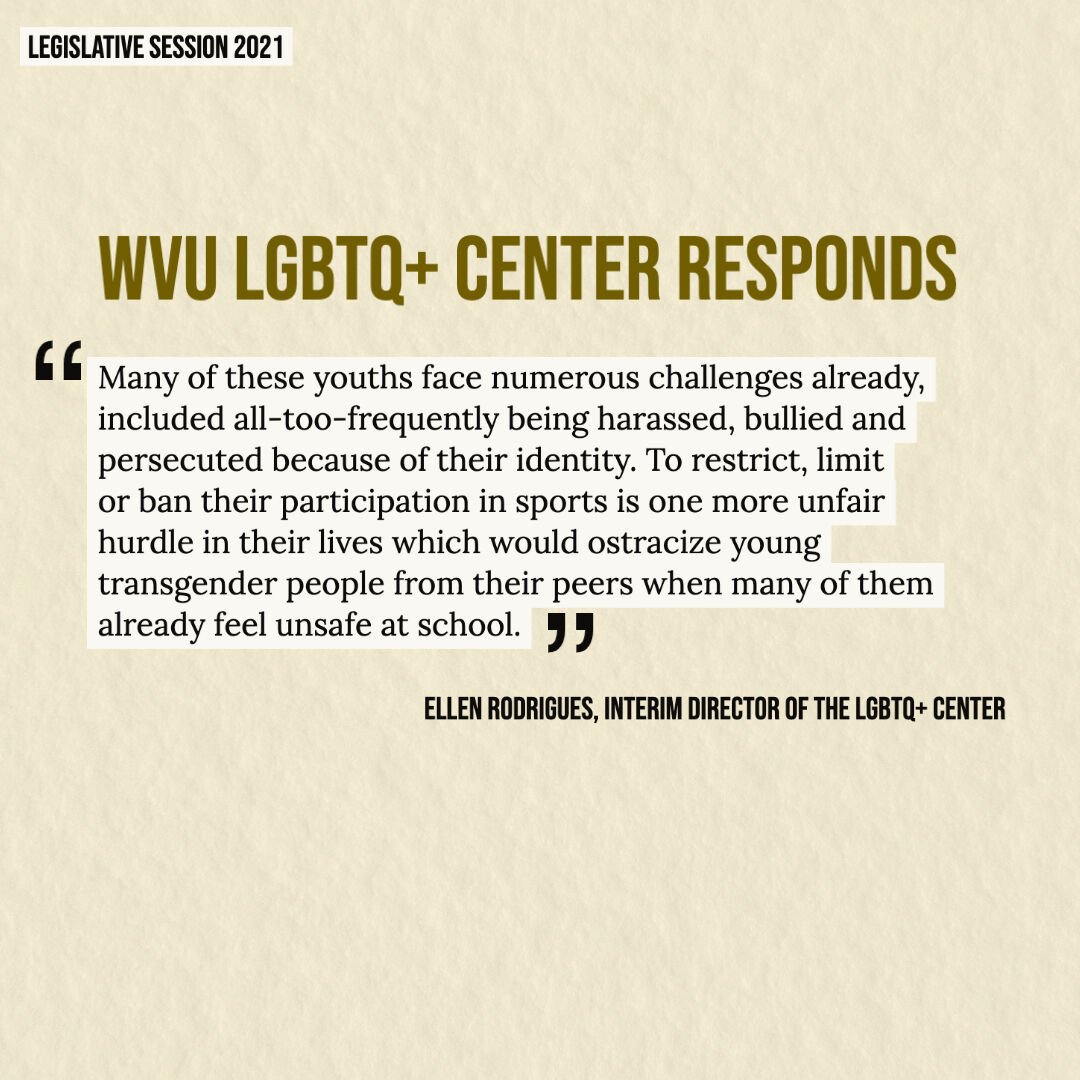 A quote from the WVU LGBTQ+ Center's response to HB 3293. 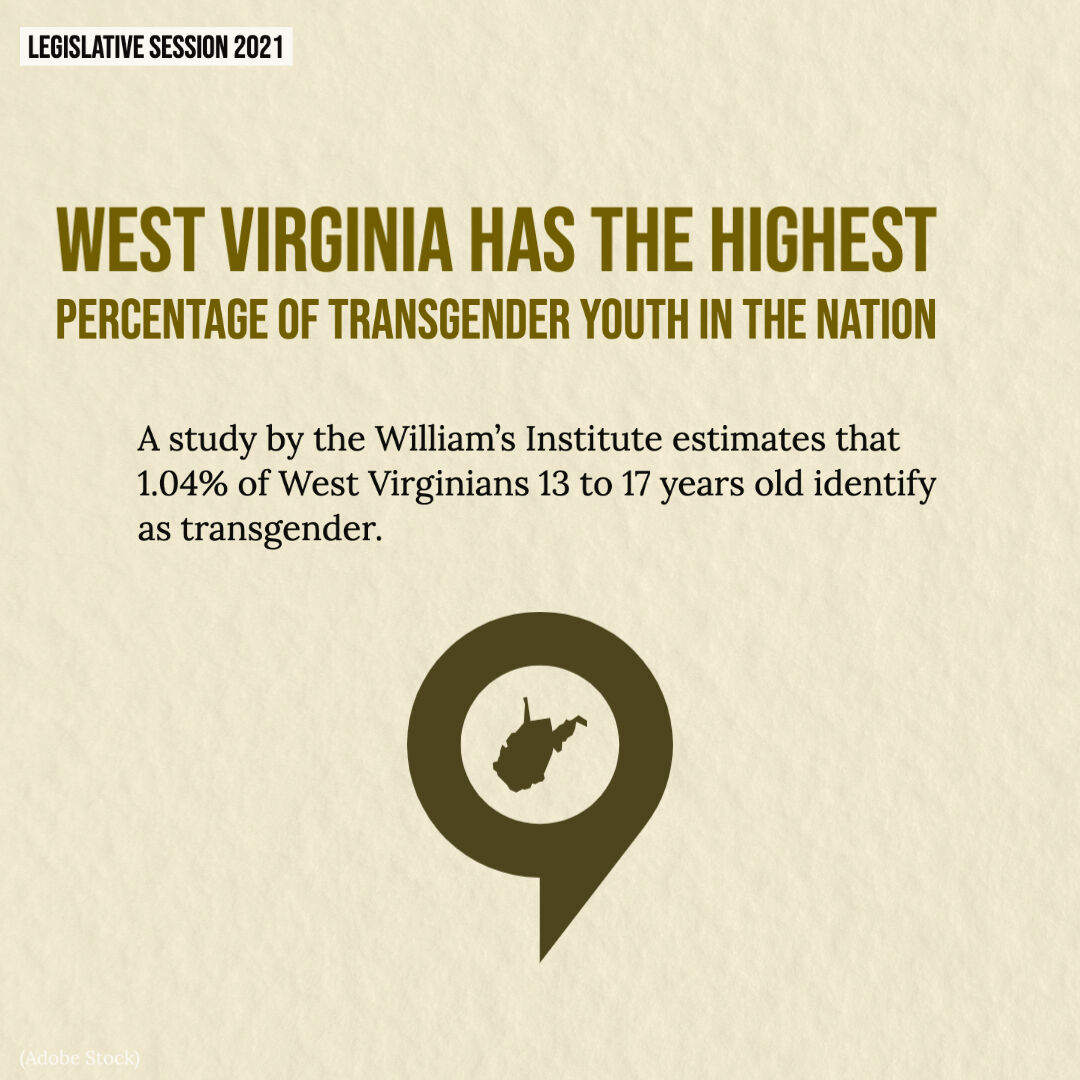 The William's Institute is a think tank at the University of California, Los Angeles School of Law dedicated to conducting rigorous, independent research on sexual orientation and gender identity issues, according to its website.

A graphic depiction of the Capitol building in Charleston, West Virginia.

A quote from the WVU LGBTQ+ Center's response to HB 3293.

The William's Institute is a think tank at the University of California, Los Angeles School of Law dedicated to conducting rigorous, independent research on sexual orientation and gender identity issues, according to its website.

In response to a bill that would effectively ban transgender athletes from participating in secondary school sports, the LGBTQ+ Center at West Virginia University is urging those in opposition to contact their representatives.

“As advocates for the transgender community, we are very concerned about the negative and harmful consequences that come from dangerous and unnecessary legislation like House Bill 3293,” said Ellen Rodrigues, interim director of the LGBTQ+ Center, in a statement.

House Bill 3293 passed 78-20 in the House of Delegates Thursday afternoon and will now move to the Senate floor.

It would require that all public school students provide birth certificates confirming their sex at birth to participate in school sports. The bill wouldn’t apply to co-educational secondary school sports.

The bill was first introduced earlier this month by lead sponsor, Delegate Caleb Hanna, R-Nicholas, in the House Education Committee. He and other proponents of the bill believe transgender athletes have an unfair competitive advantage compared to their counterparts.

“We’re not trying to discriminate,” Delegate Joe Ellington, R-Mercer, said during the final reading in the House Thursday afternoon. “We’re just saying that’s what your gender is.”

Those in opposition believe the bill is a direct violation of human rights and that there is no evidence supporting the claim that transgender athletes have an inherent competitive advantage.

Rodrigues said the bill would jeopardize a student’s access to opportunities associated with interscholastic sports, such as teamwork, discipline and self-confidence.

“Making it harder for them to be a kid, to participate in activities with their classmates, and to enjoy fair and equal treatment in school activities is the wrong choice and could jeopardize efforts to attract population and economic growth and demonstrate our welcoming and caring nature,” Rodrigues said.

According to the William’s Institute, West Virginia has the highest percentage of transgender youth in the nation. The study estimates that 1.04% of West Virginians 13 to 17 years old identify as transgender.

“Many of these youths face numerous challenges already, included all-too-frequently being harassed, bullied and persecuted because of their identity,” Rodrigues said. “To restrict, limit or ban their participation in sports is one more unfair hurdle in their lives which would ostracize young transgender people from their peers when many of them already feel unsafe at school."

HB 3293 is one of at least 35 bills introduced by state legislators throughout the nation that would place restrictions on transgender athletes, per NPR.

“No student should be denied these opportunities,” Rodrigues said.

Community rallies in support of the THRIVE Act

Dance science program to be added to exercise physiology division