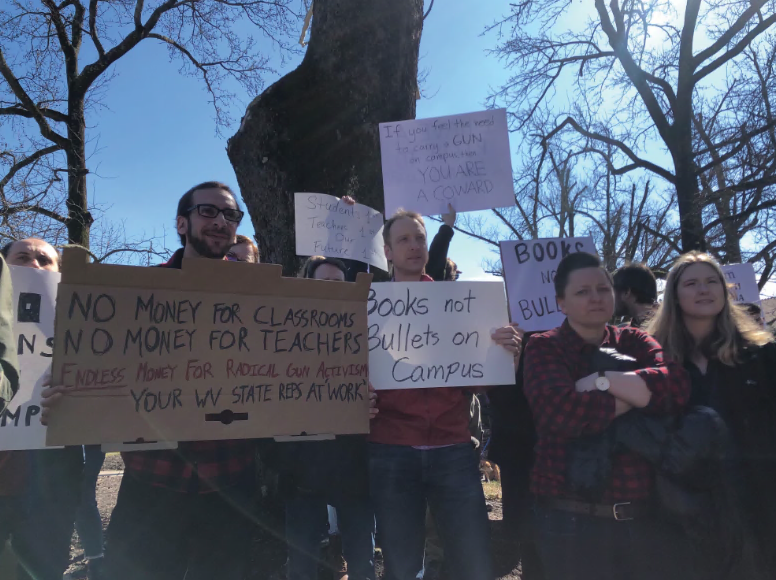 More than 100 faculty, students and community members attended a rally in woodburn circle organized in opposition to the current campus carry bill in the state legislature. 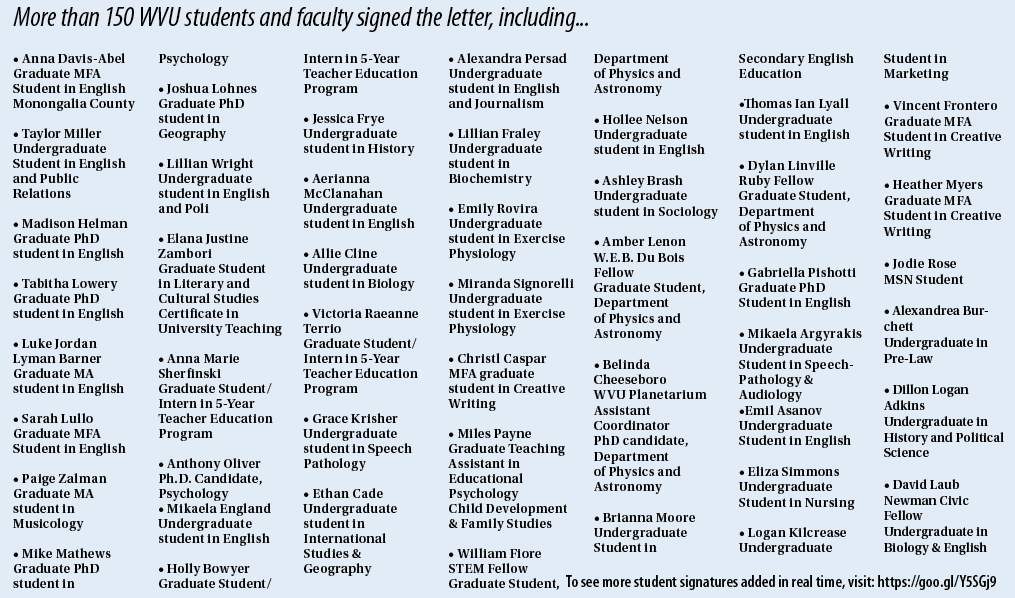 Some names of those who signed the letter

As students of the WVU community, we strongly oppose HB 2519, legislation that would require us to attend a school where anyone could conceal a handgun so long as that person obtained a permit. Many of us have signed an open letter written earlier today entitled, “Open Letter on Campus Carry at West Virginia University,” but after discussing with one another, we decided we needed our own letter as students at this institution.

To say that this legislation goes against everything we want in our academic institution is an understatement. We chose to seek higher education because we want to solve the world’s problems with our words and our ideas, not with guns and violence.

Inviting guns into our classrooms will fundamentally change how our education system works. We are such a diverse group of students at WVU, and we’ve excelled at welcoming the views and perspectives of people from a wide array of backgrounds. How are we supposed to continue to voice our controversial ideas, to challenge one another in thought and practice if we know that the person we are engaging with may be wearing a weapon?

Furthermore, how can we ask the most vulnerable of us — our peers of color, our peers with intellectual and physical differences, our peers from other cultures and countries, our peers who have experienced trauma at the hands of guns yet have sought academia as a place to challenge their minds in safety — to continue to engage with us in sometimes passion-filled discourse if they cannot be certain weapons will not be in the room?

To say we have nothing to fear because only lawful gun owners will be present on campus is to ignore the researched fact that people “are nine times more likely to die from unintentional firearm injuries when they live in states with more guns, relative to states with fewer guns.”1

The mere presence of more guns on our campus makes us statistically more likely to be injured by them, or even killed.

Most accidental gun injuries and deaths are on people under the age of 25: that’s us. People in our age range are most susceptible to accidental shootings because of “specific behavioral characteristics”2 that we physically cannot mature out of until we’re older. That is if we make it to 25, of course. To say this legislation will allow students to be more protected against people who want to do us harm is inaccurate and insulting. We have seen time and time again how the “good guy with a gun” theory proves false. We are at an institution that believes in innovative problem-solving and bettering our world.

We chose to come here for that reason, and we want the chance to take part in that kind of innovative, intellectual environment. To offer that only solution to the problem of college safety is to arm every person who wants it is to end the conversation before we’ve had a chance to enter it. In what other scenarios would we ever consider adding more of the problem to fix the problem? Guns in our classrooms and in our dorms are not the answer.

Almost 40,000 people are killed by guns each year in the U.S. Nearly two-thirds of those deaths are suicides and the rate of suicide amongst Americans between the ages of 14 and 25 has been steadily climbing since 2014. 3

It is a known fact that students in college are juggling a lot of stressful events. Many are away from home for the first time; they are taking heavy course loads and are often under much economic stress. These circumstances, accompanied by the normal woes of figuring out who we are, has led many of us into periods of depression. How different would many of our stories be if, at our lowest point, we had a gun available in our dorm room? More guns will not make us safer, not from others and not from ourselves.

At anywhere from $10 million to $11.5 million, the cost of this legislation could fund a full year’s worth of WVU tuition for nearly 1,300 West Virginia high school seniors. Or with that money, we could fund more than 300 West Virginia first-generation students for the entirety of their undergraduate degrees. In a state that has been hurting for young entrepreneurs and economic investment, it seems nonsensical that we would spend this much money to please ALEC and the NRA but not to invest in our own futures.

Lastly, if nothing else, passing HB 2519 will hurt the University on the national stage. Already, graduate students offered positions in some of our most prestigious programs are withholding their decisions in order to see how this legislation will play out. They often have many options of schools where they can research, publish and add to the prestige of the institutions, yet for many, the possibility of guns in their classroom is enough for them to remove WVU from their list of considerations. Many of the graduate students signed on this letter have reconsidered pursuing their next higher-level degree at WVU if this legislation passes.

In order to recruit the top minds, we need to be a place that top minds want to go. Because this legislation defies all logic as we see it, passing HB 2519 will make WVU a place where logical minds will not want to attend. Our enrollment will suffer, the quality of our educations will suffer, and perhaps most direly, there will be some students who gravely suffer if you allow this legislation to pass.

We urge the WVU administration to support students, faculty, staff and the entire WVU community by opposing HB 2519 in its totality.

For any of our legislators looking on in Charleston, we also ask for you to reject this legislation and we humbly remind you that the vast majority of us are voting constituents from across the state, too. Your vote will signal the value you place on our futures and our education, and we will remember.

Album Review | ‘An Evening With Silk Sonic’: Two powerhouses have the time of their life

OPINION | Gee's involvement in UATX is misguided and could get messy