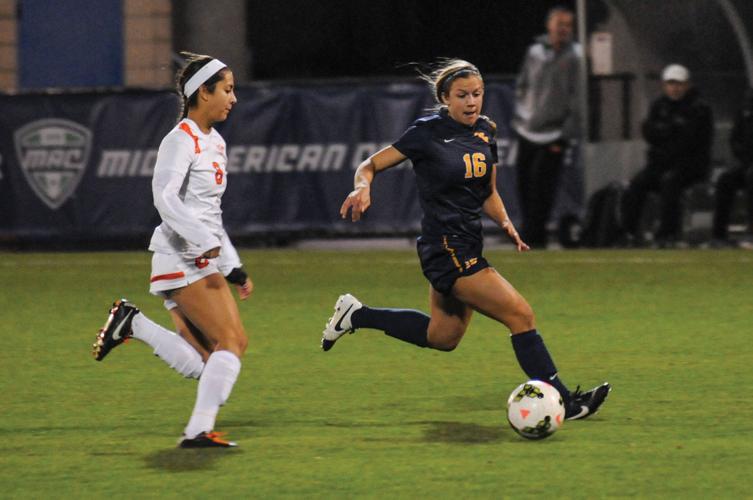 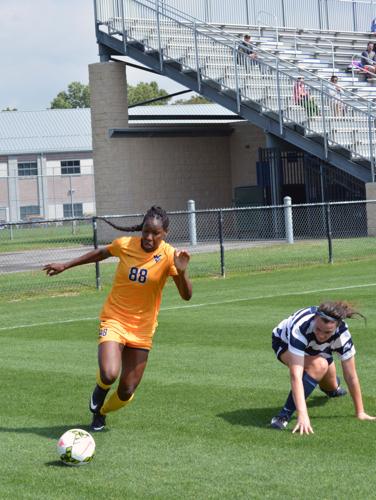 Junior defender Kadeisha Buchanan evades a defending player from Villanova in a game against the Wildcats last August.

Junior defender Kadeisha Buchanan evades a defending player from Villanova in a game against the Wildcats last August.

Utley and Buchanan received these awards after a successful weekend for the Mountaineers, where they dealt a 1-0 defeat at Maryland on Friday and routed the Duquesne Dukes 5-0 at Dick Dlesk Soccer Stadium on Sunday.

Utley led the way offensively for the Mountaineers, leading the team with five points over the weekend. The 5-foot-4 senior from St. Louis, Missouri, pounced on a loose ball in the 25th minute to fire home the only goal in West Virginia’s win over Maryland and nearly notched two more goals on close chances that didn’t find the net.

Utley immediately built on that dangerous performance against Duquesne. Less than three minutes into Sunday’s match, Utley scored off a perfect pass from midfielder Ashley Lawrence, giving her a three-game scoring streak and the 10th-fastest goal in program history.

Utley would later add an assist in the game, feeding sophomore Michaela Abam to make the score 3-0.

The senior was tipped for big things heading into the season as one of West Virginia’s primary threats going forward. Utley was an All-Big 12 Second Team selection in 2014, finishing second on the team with 15 points, scoring five goals and adding five assists.

Meanwhile, one of the biggest stars on the team added to her prodigious list of accolades on Tuesday. Kadeisha Buchanan earned Big 12 Defensive Player of the Week after leading a Mountaineer back line that didn’t allow a score and held Duquesne without a single shot on goal, the second time West Virginia has kept an opponent from putting one on the net this season.

Buchanan was also named to the TopDrawerSoccer.com Team of the Week for her efforts over the weekend. West Virginia has allowed just two goals in four games so far this season, with both of those scores coming in last week’s 2-1 loss to Virginia Tech.

A 5-foot-6 junior from Brampton, Ontario, Canada, Buchanan has established herself as one of the best athletes currently wearing Mountaineer colors. An All-Big 12 First Team selection in both of her first two years at West Virginia, Buchanan added a Big 12 Defensive Player of the Year award to her name last season.

A regular selection for the Canadian national team, Buchanan broke onto the world stage at this past summer’s FIFA Women’s World Cup. Named to the Canadian squad alongside WVU teammate Ashley Lawrence, Buchanan flourished on her home soil, earning Best Young Player honors for the tournament and being named to the World Cup’s All-Star team.

The Mountaineers (3-1) currently sit at No. 11 in the most recent NSCAA Coaches’ Poll. They’re next scheduled to face No. 7 Penn State (2-0-1) on Friday night and Villanova (0-3) on Sunday, with both matches to be played at Dick Dlesk Soccer Stadium.

Countdown to End of Fall Semester

The Daily Athenaeum began in 1887 and remains the independent student voice of West Virginia University. All content is produced by students, funded by student fees, advertising and generous donations by readers like yourself. Your gift goes directly to supporting our students and powers our experiential newsroom.

Give to The DA
Donations can be a one-time gift or set to recurring. All donations are tax deductible.
© Copyright 2022 The Daily Athenaeum - West Virginia University, 284 Prospect Street Morgantown, WV | Terms of Service | Privacy Policy